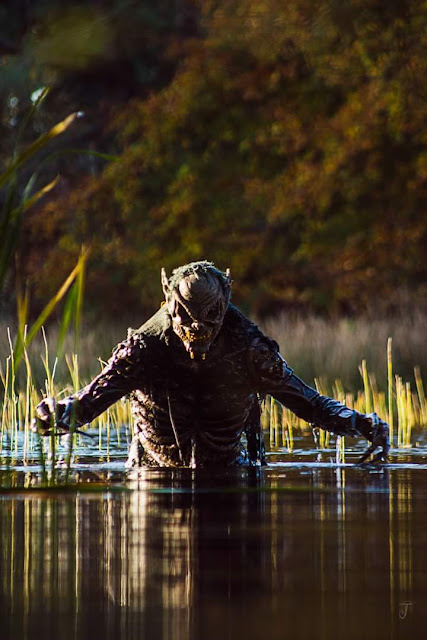 The Mill Race Park Monster is a beast that was purportedly seen in Columbus, Indiana in 1974. It launched what is considered by some people to be the largest monster hunt in US history. It has been described by witnesses as bipedal, between six to seven feet tall, and having a mossy green appearance.

On November 1st, 1974, the police department in Columbus, Indiana received reports from at least two sets of eyewitnesses who claimed to have seen and even possibly been attacked by a huge green-skinned monster by the water inside Mill Race Park.

The first report involved four young women whose names were not released by the police department. At about 3 PM, one of the women spotted the monster between two trees in the park. The group was able to escape and immediately reported their encounter to the police. They stated they had seen a "green, hairy, and large" creature.

The second report involved a pair of women unrelated to the first group, and who were also supposedly unaware of the sighting that had previously been reported. Tyra Cataline, one of those women, later came forward in 2014 on the show Monsters and Mysteries in America. She also told her story in 2015 on a local Fox News station, a full 41 years after the fact. She told them, "It was something. I don't know what it was, but it wasn't somebody wearing a costume."

Cataline's report also described the monster as having slime on its face and possessing large claws. The women claimed to have been attacked, and their car had scratch marks and a stench as a result of that attack.

On November 9th, 1974, another newspaper, the Indianapolis Star, wrote a report of yet another encounter, this time involving two city dogcatchers, Rick Duckworth and John Brown.

Duckworth claimed he attempted to chase the monster after it ran from them. He also claimed after the fact that it was not a monster at all, but merely a large man "wearing a green mask and green blankets."

It was after this report that that amateur monster hunters and curiosity seekers began to pour into the area. One night, there was even supposedly over 100 cars in the park due to this influx of people.

There were so many people hunting for the Mill Race Monster that it soon became necessary for local law enforcement to respond. On November 8th, 1974, the director of the city park, Robert Gillikin, stated that, "It may become necessary to close the park to the public at night, not because of the 'monster' but because of the public."

Gillikin followed through with his statement, and the park was closed to the public at night soon after. Police were also stationed around all entrances in order to prevent people attempting to hunt the Mill Race Monster from entering. The Columbus Police Department even unofficially appointed Officer Kenneth St. John as "Monster Control Officer."

No one has ever confirmed whether or not the Mill Race Monster was fake, as Duckworth claimed, despite all the attempts by multiple people to hunt it. One interesting element to add into the mix, however, was that in the story initially printed by The Republic on November 6th, one of the two unnamed men speculated that because there had been UFOs supposedly seen over the area as well, the Mill Race Park Monster might have been of alien origin.

Sightings have continued up to the present day. The story run by the Fox News station featuring Tyra Cataline was prompted by a report on October 10th, 2015 from a local hunter. He claimed to have seen a bigfoot-like creature, which may or may not have been related to the Mill Race Monster, in the Morgan-Monroe State Forest in Martinsville, Indiana.

The fact that there has been such a recent reported sighting shows that the Mill Race Monster's notoriety has continued, and like any good monster story, it is unlikely the legend will go away any time soon.