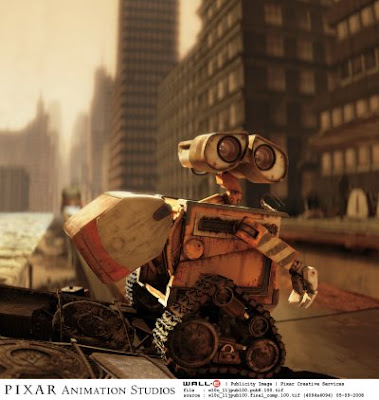 What if mankind had to leave Earth
and somebody forgot to turn off the last robot?

That’s the intriguing and whimsical premise posed by Disney•Pixar’s extraordinary new computer-animated comedy set in space, “WALL•E.” Filled with humor, heart, fantasy, and emotion, “WALL•E” takes moviegoers on a remarkable journey across the galaxy and once again demonstrates Pixar’s ability to create entire worlds and set new standards for storytelling, character development, out-of-this-world music composition, and state-of-the-art CG animation.
Set in a galaxy not so very far away, “WALL•E” is an original and exciting comedy about a determined robot. After hundreds of lonely years doing what he was built for, WALL•E (Waste Allocation Load Lifter Earth-Class) discovers a new purpose in life (besides collecting knickknacks) when he meets a sleek search robot named EVE (Extra-terrestrial Vegetation Evaluator). EVE comes to realize that WALL•E has inadvertently stumbled upon the key to the planet’s future and races back to space to report her findings to the humans who have been eagerly waiting aboard the luxury spaceship Axiom for news that it is safe to return home. Meanwhile, WALL•E chases EVE across the galaxy and sets into motion one of the most incredible comedy adventures ever brought to the big screen.
Joining WALL•E on his fantastic journey across the universe 800 years into the future is a hilarious cast of characters, including a pet cockroach and a heroic team of malfunctioning misfit robots. 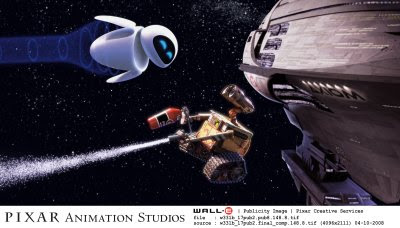 “WALL•E” is the latest film from Academy Award®-winning director/writer Andrew Stanton, who joined Pixar in 1990 as its second animator and the fledgling studio’s ninth employee. He was one of the four screenwriters to receive an Oscar nomination in 1996 for his contribution to “Toy Story” and was credited as a screenwriter on subsequent Pixar films, including “A Bug’s Life,” “Toy Story 2,” “Monsters, Inc.,” and “Finding Nemo,” for which he earned an Oscar nomination as co-writer. Additionally, he co-directed “A Bug’s Life,” executive-produced “Monsters, Inc.” and the 2007 Academy Award®-winning “Ratatouille,” and won an Oscar for Best Animated Feature for “Finding Nemo.”
The idea for “WALL•E” came about in 1994 at a now-famous lunch that included Pixar pioneers Stanton, John Lasseter, Pete Docter, and the late storytelling genius Joe Ranft. With their first feature, “Toy Story,” in production, the group suddenly realized that they might actually get a chance to make another movie. At that fateful gathering, the ideas for “A Bug’s Life,” “Monsters, Inc.,” and “Finding Nemo” were first discussed. “One of the things I remember coming out of it was the idea of a little robot left on Earth,” says Stanton. “We had no story. It was sort of this Robinson Crusoe kind of little character—like, what if mankind had to leave Earth and somebody forgot to turn the last robot off, and he didn’t know he could stop doing what he’s doing?”
Years later, the idea took shape—literally. “I started to just think of him doing his job every day and compacting trash that was left on Earth,” Stanton recalls. “And it just really got me thinking about what if the most human thing left in the universe was a machine? That really was the spark. It has had a long journey.”

The image of a lonely little robot—the last one on the planet—
methodically going about his job picking up trash intrigued director/co-writer Andrew Stanton from the first time it came up over lunch with his colleagues back in 1994. It would be many years before he would find a unique story that could use this character to its full potential. 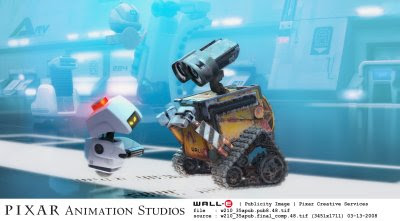 Stanton explains, “I became fascinated with the loneliness that this situation evoked and the immediate empathy that you had for this character. We spend most of our time on films trying to make our main characters likeable so that you want to follow them and root for them. I started thinking, ‘Well, where do I go with a character like this?’ And it didn’t take long to realize that the opposite of loneliness is love or being with somebody. I was immediately hooked and seduced by the idea of a machine falling in love with another machine. And especially with the backdrop of a universe that has lost the understanding of the point of living. To me, that seemed so poetic. I loved the idea of humanity getting a second chance because of this one little guy who falls in love. I’m a hopeless romantic in cynic’s clothing. This movie gave me a chance to indulge in that romantic side a little more than I normally would in public.”

Jim Reardon—a veteran director and story supervisor on “The Simpsons,” who directed 35 episodes of the show and supervised story on nearly 150 episodes—came on board to be head of story for “WALL•E.” He ended up co-writing the screenplay for the film along with Stanton.
According to Reardon, “We started with the idea of making ‘WALL•E’ a comedy, but about a third of the way through, we realized that the film is a love story, too. WALL•E is an innocent and child-like little character who unintentionally ends up having a huge impact on the world. The story arc of the film is really about EVE. Her character undergoes the biggest change, and the film is as much about her as it is about him. She’s very sleek, techno-sexy, and very futuristic-looking. He’s totally designed just to do his job and is rusty, dirty, and ugly. But we always thought that would make a great romantic adventure.” 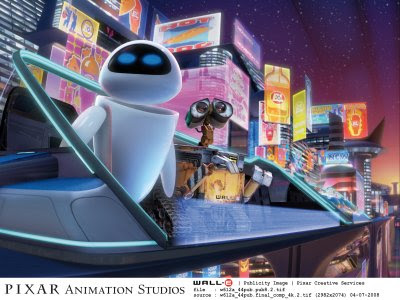 Producer Jim Morris sums it up. “This film is a mix of genres. It’s a love story, it’s a science-fiction film, it’s a comedy, it’s a romantic comedy.”

One of the great turning points for Stanton in creating the story for “WALL•E” was stumbling upon the idea of using the musical imagery and songs from the 1969 movie version of “Hello, Dolly!” to help him define WALL•E’s personality. In fact, it is WALL•E’s repeated viewings of an old videotape of that film (the only one in his collection) that have led to the glitch of his romantic feelings.

Stanton explains, “I had been searching for the right musical elements to go with the film, and stumbling upon ‘Hello, Dolly!’ was the best thing that could have ever happened. The song ‘Put on Your Sunday Clothes,’ with its ‘Out There’ prologue, seemed to play so well with the themes of the film and yet would normally not be the kind of music you’d expect to find in a film like ours. It’s a very naïve song, really, and it’s sung in ‘Hello, Dolly!’ by two guys who don’t know anything about life. They want to go to the big city, and they ‘won’t come home until we’ve kissed a girl.’ There’s such simple joy to it, and it really worked for us. When I found ‘It Only Takes a Moment,’ it was like a godsend. That song became a huge tool for me to show WALL•E’s interest in what love is.”

Says producer Morris, “Holding hands is the thing that WALL•E’s wanted to do the entire movie, ’cause it’s what he’s learned from watching ‘Hello, Dolly!’...it’s the way you show affection in that movie.”

Adds Stanton, “And I realized, ‘That’s right.’ That musical moment in the film showed these two people holding hands, and I knew it was meant to be,” he says. “I’ve always felt, almost with a zealous passion, that animation can tell as many stories in different ways as any other medium, and it’s rarely been pushed outside of its comfort zone,” concludes Stanton. “I was so proud to have had something to do with the origin and creation of ‘Toy Story,’ because I felt that the tone of the movie and the manner of its storytelling broke a lot of conventions that were in people’s minds. And I still feel like you can keep pushing those boundaries. Even before I knew this film was going to be called ‘WALL•E,’ I knew it was yet another step in pushing those boundaries out farther. I’m so proud that I got a chance to make it and that it matched my expectations.”

Jim Reardon, head of story for “WALL•E,” observes, “What we didn’t want to do on this film was draw human-looking robots with arms, legs, heads and eyes, and have them talk. We wanted to take objects that you normally wouldn’t associate with having humanlike characteristics and see what we could get out of them through design and animation.”

Stanton explains, “We wanted the audience to believe they were witnessing a machine that has come to life. The more they believe it’s a machine, the more appealing the story becomes.”
Jim Reardon, head of story for “WALL•E,” observes, “What we didn’t want to do on this film was draw human-looking robots with arms, legs, heads and eyes, and have them talk. We wanted to take objects that you normally wouldn’t associate with having humanlike characteristics and see what we could get out of them through design and animation.”

Stanton explains, “We wanted the audience to believe they were witnessing a machine that has come to life. The more they believe it’s a machine, the more appealing the story becomes.”

One of the biggest challenges facing the animators was the need to communicate emotions and actions clearly without being able to rely on traditional dialogue.

“We felt we could do it with nontraditional dialogue, maintaining the integrity of the character,” says Stanton. “In real life, when characters can’t speak—a baby, a pet—people tend to infer their own emotional beliefs onto them: ‘I think it’s sad,’ ‘She likes me.’ It’s very engaging for an audience.”

According to Ed Catmull, president of Disney and Pixar Animation Studios, “In ‘WALL•E,’ the animators are really operating at the height of their craft to be able to convey emotions and complex thoughts with so few words. It’s more about being able to touch people through the animation.”

Stanton notes, “In the world of animation, pantomime is the thing that animators love best. It’s their bread and butter, and they’re raised on it instinctually. John Lasseter realized this when he animated and directed his first short for Pixar, ‘Luxo Jr.,’ featuring two lamp characters who express themselves entirely without dialogue. The desire to give life to an inanimate object is innate in animators. For the animators on ‘WALL•E,’ it was like taking the handcuffs off and letting them run free. They were able to let the visuals tell most of the story. They also discovered that it’s a lot more difficult to achieve all the things they needed to.

“I kept trying to make the animators put limitations on themselves, because I wanted the construction of the machines and how they were engineered to be evident,” Stanton adds. “The characters seem robotic because they don’t squash and stretch. It was a real brain tease for the animators to figure out how to get the same kind of ideas communicated and timed the way it would sell from a storytelling standpoint and yet still feel like the machine was acting within the limitations of its design and construction. It was very challenging—and completely satisfying when somebody found the right approach and solution.”
By Ken Hulsey at June 27, 2008