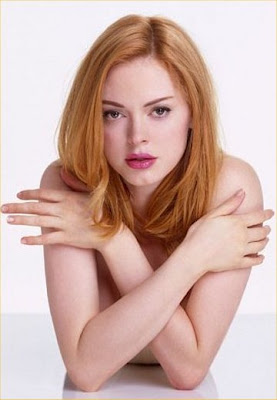 Grindhouse star Rose McGowan and her director boyfriend are set to revive Brigitte Nielsen's Red Sonja in a new movie.

The actress and Robert Rodriguez have confirmed they're planning a major remake of the 1985 big screen adaptation of the comic book series, in which Nielsen played a bikini-clad, sword-wielding barbarian vixen.

And even McGowan, who played a one-legged zombie killer in Rodriguez's Planet Terror Grindhouse film, admits she's surprised the Red Sonja role is hers.

The script was sent to her and she admits she had no idea why she had been selected to play the new Sonja.

She tells USA Today newspaper, "I thought it was funny. I do have a body made for sitting on a veranda with mint juleps and a parasol. I don't know why I always have to save the planet."
But Rodriguez insists his partner is perfect for the role: "Rose is a pistol. She's whip-smart, has attitude to burn, is sexy, extremely strong, yet has a vulnerable side that would surprise her closest friends. That description also fits Red Sonja."

Last year McGowan and Rodriguez tried to work together on a remake of the 60s' sexy sci fi film "Barbarella." Universal pulled the financing for the film when Rodriguez insisted that McGowan fill the title role that Jane Fonda made infamous. The studio believed that the young starlet didn't have what it took to carry the lead role in such a big budget movie.

Apparently there is another studio out there that believes McGowan will be a bigger box office draw than Universal did.
By Ken Hulsey at June 27, 2008