The Mummy: Tomb Of The Dragon Emperor - Creating An Epic Backdrop 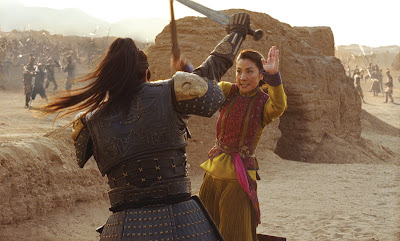 When production designer Nigel Phelps first met with director Rob Cohen, he knew they would be embarking on an immensely challenging creative journey. It was vital to Cohen that The Mummy: Tomb of the Dragon Emperor have an epic look and feel to it, and that meant Phelps would need to give the production a unique and mythic visual canvas. A lifelong dream of the director’s—to share the fantastic culture and heritage of China in a film with the scope of this picture—the shoot was a challenge like nothing the two men had ever faced. And it all started with the design.

“When you begin a project like this and everything has to look huge, you have to decide how much will be physically built and how much will be digital,” explains Phelps. “That’s the equation you work out with the director. Going to China completely opened up the world to do a lot more physical scenery than we could have done anywhere else. When you conceive sets like a mausoleum that contains the Terracotta Army, it’s obviously not going to be an intimate little set.”

The style of the film naturally evolved from Cohen’s lifelong passion for Chinese culture and his Buddhist studies. He was concerned to make everything as true as possible, and the partners in design depicted a good deal of spiritual scenery in the film— particularly in the Himalayas and the stupa courtyard. For Cohen, the film’s design informed a world that reflected “Chinese history in an unusual way, and had a lot of fun with it as we explore two periods: the true history of 200 B.C. and the state of affairs in China in 1946.”

While collaborating with Phelps for the film’s look, Cohen voraciously read of the stories of the Terracotta Warriors of Xi’an, the Warring States period before the unification of China, the First Emperor’s immortality quest and the Great Wall’s construction.

The director and production designer agreed they did not want to be restricted in camera moves when it came time to lens the world’s most powerful emperor roaring across the continent (within two periods of two millennia), so the majority of the sets had to offer cinematographer Simon Duggan and his crew “360-degree shoots.” To create these enormous set pieces in Canada and China, Phelps began study that continued throughout the production. A team of Montreal researchers assisted him as they all worked at a rapid pace to design; it continued as they moved from set to set, followed by hundreds of construction crew workers to manifest their sketches.

Form would not always follow the original screenplay’s function; Phelps and Cohen remained open to expanding upon the script as they scouted locations. The designer gives an example that altered the film’s original beginning: “When we first came to China to scout, we traveled to Ningxia to look at these sand dunes the size of Denmark. I was flipping through a hotel brochure, a sort of ‘What’s on in Ningxia,’ and I discovered these pyramids that were absolutely phenomenal.

“The landscape is very similar, geographically, to what we had in Tian Mo [a desert area north of Beijing]—the foothills, the mountains and everything surrounding it,” he continues. “The shot was unscripted, but I knew Rob would love it so I brought him the idea and we decided to use it at the beginning of the film. People will look at the pyramids and think they are CG…you just don’t expect to see these things in China.”

The massive pyramids reside in a valley of hundreds of tombs that contained the remains of a race of Chinese annihilated by the Mongolians—because members of their tribe shot the arrow that killed Genghis Khan. It has only been a couple of hundred years since the Chinese began uncovering this land that had been completely forgotten. These tombs are the last vestiges of the culture of a people who killed the terrifying ruler.

The designer, veteran of such epic films as the blockbuster Troy, explains his unique take on imagining a film: “When I read a script, I look at the story and I see everything in terms of light and shape. This is light, and that is dark; this is tall, thin and that is short, fat. You want a variety and balance that goes with the way everything works with the script narrative. It’s a bit like music; the same principle applies to color.”

As his team worked on illustrations for The Mummy: Tomb of the Dragon Emperor, Phelps was inspired to have gold light serve as the primary influence on the film’s color palette. For example, one of the first sets his team created was the stupa courtyard set, in which they used thangkas (colorful painted scrolls) with frescoes on the perimeter. As the set was in shadow and Phelps and DP Duggan needed a swatch of color to catch the audience’s eyes, a member of the team suggested they use gold leaf on certain sections of the paintings.

“Gold is a great color that goes with everything,” concludes Phelps. “You can take it up or take it down; it works really well with the earth tones and the reds. It became a link in all of the sets—even in Imhotep’s nightclub set, where the color temperature of the lights gave that amber color through everything.”

Email ThisBlogThis!Share to TwitterShare to FacebookShare to Pinterest
Labels: Action, Movie, Rob Cohen, The Mummy, The Mummy Tomb Of The Dragon Emperor, USA