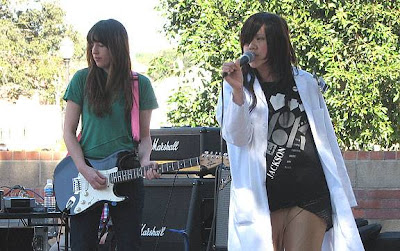 Brazil's CSS release their follow-up to 2006's "Cansei de Ser Sexy" ("I got tired of being sexy"). They've toured worldwide a number of times with the likes of Gwen Stefani, Ladytron, Klaxons, and Diplo, and played festivals from Coachella, Pitchfork, and Virgin to Reading, Benicassim, Roskilde, and beyond. "Donkey" is tough, street-ready, and recreates the frenetic energy of their live shows. Equal parts dance party, urban circus, and out-and-out chaos.

Cansei de Ser Sexy (pronounced [kɐ̃'seɪ dʒɪ ser 'sɛksɪ], literally "got tired of being sexy" in Brazilian Portuguese), better known worldwide as CSS, is a Brazilian band from São Paulo. Their songs have an electro/rock sound, and are sung in both English and Portuguese; their lyrics mostly concern pop culture.

CSS formed in September 2003, consisting of a group of friends. Their name was taken from a reported quote by Beyoncé, who allegedly declared that she was "tired of being sexy"

The band first achieved notoriety through the Internet. Some of its members, like Adriano Cintra, had been previously known in São Paulo's underground club scene, but not outside of the local alternative subculture. Others, like Lovefoxxx, were owners of popular fotolog and flickr pages. Their collective band fotolog also gained popularity and their songs were frequently downloaded from Trama Virtual's website (a Brazilian website loosely similar to MySpace Music). Trama Virtual invested heavily in the band, inviting a series of Brazilian and British journalists to report on them. Articles were printed in several Brazilian magazines and the British newspaper The Guardian, whose reporter, Peter Culshaw, was invited to see the band playing just before their signing for the debut, at a club in São Paulo. He predicted that they "could be the biggest band ever to come out of South America". Several songs by CSS were featured in mainstream media: "Meeting Paris Hilton" was featured in the Latin American broadcasting of The Simple Life, "Superafim" was used in the Brazilian version of the Big Brother reality show, and "Computer Heat" was used in the South American version of the game The Sims 2: Nightlife, including a version in Simlish. Still without a record deal, they released two independent EPs in 2004, and played that year at TIM Festival.

"Rat Is Dead (Rage)", the first single to be taken from their second album was made available as a free download from the CSS website in April 2008. The band's second album Donkey, was released on July 21, 2008 with first single proper, "Left Behind", preceding it earlier in the month.