Will You Pay $35 For A Movie Ticket? Some Morons Think You Will 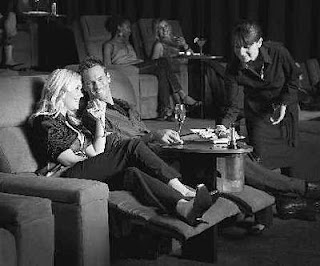 Now there are bad ideas, and then there are really bad ideas. One of the worst possible ideas to arise during the terrible economic times that we are facing here in America has got to be Village Roadshow Ltd's idea for a chain of luxury movie theatres that will charge a whopping $35 a ticket. That's right $35 a head to see a movie.

These new cinemas will feature suede-covered reclining armchairs, and each theater will seat no more than 40 people. Moviegoers can sip fine wine and dine on gourmet food including $15 Duck Tacos and Tuna Tartare, prepared on the premises, though you will pay more for that. Yes, that's right, the food and beverages are extra! Now check this out, personal attendants clad in black uniforms can be summoned with the press of a button to serve you or get a blanket for you if you are feeling sleepy.

Great, I get my own butler at the movies, but $35 dollars a seat?

To get a better feel for where the people at Village Roadshows head is at (maybe up somewhere) check out this great quote from Rob Goldberg, the companies chief operating officer, "It's an affordable luxury. Some people may not think of an international vacation this year, but they still want to go out and have a good time."

I don't know about you, but I will probably never ever say to my wife, "hey honey, you know I don't think that we can afford that trip to London.....so lets go to the movies instead...."

It appears that Village Roadshow believes that there is a market for this kind of "movie experience", but lets be honest, the numbers just don't jive. It is pretty common knowledge that the movie industry has been in decline for the past decade or so, due to the popularity of home video games, DVD rentals and sales, and of course rising ticket prices at theaters. Ad a declining economy to that and you have a recipe for disaster.

Regardless of common sense, three of these new "Village Roadshow Gold Class Cinemas" will be built here in Southern California by the end of 2009, including one at the former Guasti Winery in Ontario, which is being redeveloped into a retail, office and residential district. Cinemas are also planned for Costa Mesa and Pasadena.