The following are included in the second season of Torchwood: repeated bouts of unrequited love, homicidal ex-lovers, monsters from space and impending doom for major characters. Now, that's how a series' second season should play out! But what makes Russell T. (Doctor Who) Davies' sophomore set of adventure for Torchwood so engaging is that he bundles them together in a tight and cohesive package that remains dramatically involving while maintaining the proper level of science fiction adventure. John Barrowman's Captain Jack Harkness is back, having materialized in the final episode of Doctor Who's third series ("Last of the Time Lords"), and with him comes one of the show's most inventive characters: fellow Time Agent and former lover Captain John Hart, played by Buffy the Vampire Slayer's James Marsters. Hart wreaks considerable havoc in the series opener, "Kiss Kiss Bang Bang," and returns several episodes later in "Fragments" to reveal Harkness' long lost brother Gray, who brings the series to a close in "Exit Wounds" with a horrific rash of violence that rends the Torchwood team permanently asunder. It's a finale that will leave fans agape by the final frame, but it's not the only stunner in the second season. "Reset" should also raise eyebrows with both the introduction of Doctor Who companion Martha Jones (Freema Agyeman) in a three-episode arc, but also the shocking death and resurrection of a Torchwood member. Other highlights include "From Out of the Rain," which introduces one of the series' most intriguing villains, the Ghostmaker, and the alien "Adam," who throws the team into chaos with his power to suggest false memories. But the season's key storyline is the conflict between Jack, his brother Gray, and Captain Hart, which brings emotional heat and weight to the show's complex science and fantasy elements. Extras include all 13 episodes of Torchwood Declassified, the 10-minute companion series which explores elements of each episode, as well as "The Life and Deaths of Captain Jack Harkness," a 22-minute featurette (narrated by Freema Agyeman) about the character's immortal status that includes comments by Barrowman and Davies. Nine minutes of amusing outtakes and 18 minutes of deleted scenes bring this satisfying set to a close. 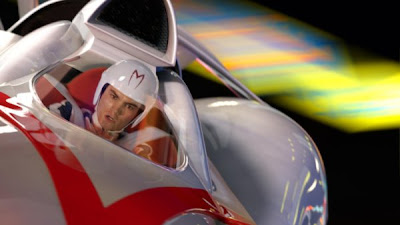 An over-the-top, sensory overload experience determined to replicate its frantic, television-anime origins, Speed Racer is wild enough to induce a headache or wow a viewer with one dazzling effect after another. Adapted for the big screen as a live-action feature, Speed Racer is written and directed by Larry and Andy Wachowski, the sibling team behind the intensely satisfying The Matrix and its busier, less interesting sequels. Where the rich mythmaking of The Matrix was entirely accessible, however, Speed Racer's overwhelming and gratuitously complicated story exposition is an enormous challenge to follow, let alone embrace. After a while, one simply surrenders to the unbroken din of dialogue concerning corporate chicanery, corruption in the sport of racing, and a value conflict between racing as a family business versus multinational cash cow. At the same time, the film's hyper-real equivalent of the old Speed Racer cartoon's great whoosh of color, motion, and edgy production design--such as inventive uses of scene-changing wipes, bold framing, shifting perspectives--are more overbearing than fun.

Emile Hirsch plays Speed Racer, younger brother of a deceased racing legend, Rex, and son of car designer Pops (John Goodman). The latter invented Speed's Mach 5, and is singularly unimpressed by an offer from a giant conglomerate that would lock Speed into exclusive racing services. Speed opts instead for family loyalty, incurring the wrath of the conglomerate's unctuous head (Roger Allam). With family honor on the line and the affections of girlfriend Trixie (Christina Ricci) behind him, Speed hits the track in hopes of fulfilling his destiny as a master racer. The cast is largely enjoyable, including Susan Sarandon as Speed's mom, Matthew Fox as mysterious Racer X, and a pair of chimps as the irrepressible Chim-Chim. All well and good, but in a movie that lives or dies by the excitement level of races that look like computer-animated Hot Wheels action, Speed Racer is a dreary adventure. 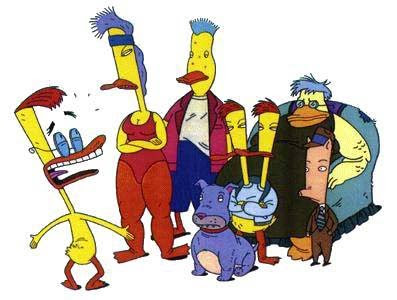 Duckman is an animated sitcom created by Everett Peck and developed by Peck, Jeff Reno and Ron Osborn, based on characters created by Peck in his Dark Horse comic.

The series follows the adventures of a lascivious private detective duck who lives with his family and sister-in-law Bernice (his late wife's identical twin). Duckman's wife, Beatrice, died before the show began. The tagline of the show, seen in the opening credits, is "Private Dick/Family Man." (Dick being short for Detective, as well as serving as a double entendre)

The series takes place in Los Angeles, as indicated by the episode "Bev Takes A Holiday" when Beverly's detective tells her "here is the address in LA" when referring to Duckman's address.

Little did Tom Cruise know that he would become a box-office superstar after he cranked up some Bob Seeger and played air guitar in his underwear. But there's more to this 1983 hit than the arrival of a hot young star. Making a stylish debut, writer-director Paul Brickman crafted a subtle satire of crass materialism wrapped in an irresistible plot about a crafty high schooler named Joel (Cruise) who goes into risky business with the beguiling prostitute Lana (Rebecca De Mornay) while his parents are out of town. Joel turns his affluent Chicago-suburb home into a lucrative bordello and forms a steamy personal and professional partnership with Lana, but only as long as the two can avoid the vengeful pimp Guido (Joe Pantoliano) and keep their customers happy. A signature film of the 1980s, Risky Business still holds up thanks to Cruise's effortless charm and the movie's timeless appeal as an adolescent male fantasy.