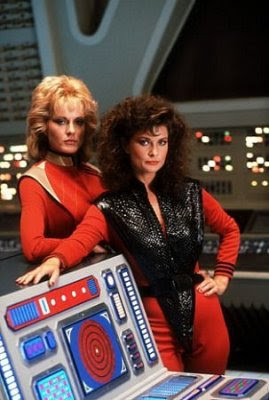 The creator of the 80s' hi sci fi series, "V", has spoken out about his displeasure that ABC has opted to reboot the series. On his website, Johnson posted this message: (Yes, it is written in third person...)

"When projects that bore Kenny’s original creative stamp and control have been taken on by other people, audiences have seen the results: earlier attempts at reviving V, as well as The Incredible Hulk movies and the recently re imagined Bionic Woman all proved to be serious misfires which unfortunately failed with the critics and with the public. Though ABC is again considering the possibility of developing a TV pilot project, it is a script development deal only and does not in any way affect Kenny’s ongoing efforts to remake his original classic as a major motion picture."

According to sources, Johnson has been pedaling a script for his own brand new "V" series entitled "V: The Second Generation" for some time now. It seems that ABC has chosen to ignore Johnson's idea and go off and make their own version. In that sense I can see why he would be a little pissed off. It sounds like the network basically told him, "Hey Thanks For The Idea! Now Go F**K Yourself!"

He does have a valid point though. Remakes of classic series generally blow, and it is in all likelihood that ABC will destroy "V". If it turns out to be anything close to the original I will be amazed.