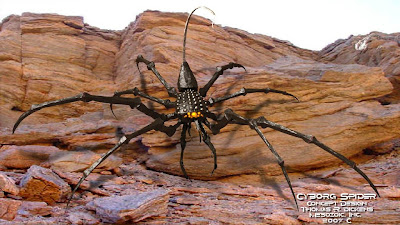 Written By: Ken Hulsey
Source: Thomas R. Dickens
Yesterday I got an e-mail from Thomas Dickens stating that he was about to wrap up shooting his latest film, "Alien Grey: Zone-X". According to Thomas he has been very busy putting together the final shots for the film, "I only have 1 more shot to do in the giant Cyborg Spider Sequence, and I have two new shots done of the end giant monster sequence."
Thomas promises to get me some pics from those scenes very soon. As of yet no one has seen the finished effects shots for those scenes so, he may be sending me an exclusive.
In the e-mail he also mentioned that the film should be on IMDB.com very soon and within the next few weeks he should know whether the film will be picked up by Sundance.
Fans will be able to listen to an interview that Thomas did with Celebrity Spotlight Radio very soon. He is planning to provide a link to that on the http://www.agz-x.com/ site as soon as it becomes available.
He also had some nice things to say about Monster Island News, "I wanted you to know how grateful and excited I am about the opportunity, and I really appreciate all that your website has done for my film, "Alien Grey: Zone-X" and my companies: Alien Grey Zone-X 1B, LLC (Film Production Company), and Mesozoic, Inc. (Special Visual Effects/Production Company)."
It is always nice to know that the work you do is appreciated. It is a pleasure to be in contact with some of the nicer people in the movie business, and Thomas Dickens is certainly on the top of that list. A class act all the way.
Look for more stuff on "Alien Grey: Zone-X" shortly.....
See Also: Three New Photos From Alien Grey Zone X / Aliens And Monsters Rule The Desert In Alien Grey Zone-X
By Ken Hulsey at November 20, 2008