Somewhere deep down in your bowels you knew it was coming. After the success ....... well ....... media hype created by their recent releases, "Mega Shark vs Giant Octopus" and "Mega Piranha", The Asylum, a studio that has made a name for itself with low-budget films that copy major Hollywood releases, would be working on another film in the same vein.

Though the studio is mum about it at present, a recent news report on CNN from the Cannes Film Festival revealed the advertising art for "Mega Shark vs Giganotosaurus", a sequel to the 2009 film, "Mega Shark vs Giant Octopus" which starred 80s pop star Debbie Gibson.

This time around, it appears that the enormous octopus has been replaced by an enormous T-Rex.

I guess that in the world of films produced by The Asylum, that makes perfect sense?

Like I stated before, there are no details yet about "Mega Shark vs Giganotosaurus", but if the studio follows the same formula from "Mega Shark vs Giant Octopus" and "Mega Piranha", the film should star another 80s singing sensation, a 70s sitcom star, or both, and include scenes of the giant Tyrannosaurus attacking battleships and the mega shark downing helicopters or possibly the Space Shuttle?

Here is a list of potential cast members for "MS vs G": Julie Brown, Laura Branigan, Jane Child, Jody Watley, Bonnie Tyler, Martika, Vanity and that chick from Animotion (yeh, like you remember her name!).

Oh, and in case that doesn't make you laugh, there was another upcoming film from The Asylum revealed in the CNN story, "Moby Dick".

Okay, you may be wondering what is such a big deal about "Moby Dick"? Well, this is The Asylum we are talking about here, so check out this tag line, “Man’s Most Powerful Weapon Versus the World’s Largest Creature”.

That means Ahab hunting a white whale the size of Pluto (the planet, not the cartoon dog) with a laser canon people!

Oh, when will this craziness end? 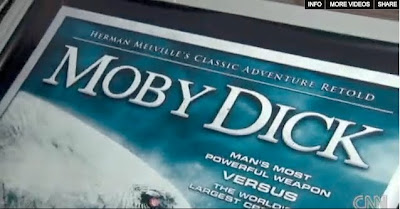