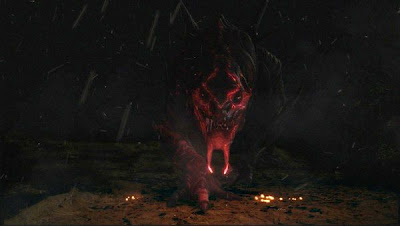 Avery Guerra was cool enough to alert me about a brand new clip from the upcoming, Vikings vs A Space Monster, movie "Outlander" that has been posted over at Undead Backbrain.

Apparently the clip was up on the movies official website, but I just checked it and the clip was no longer up, so this may be the only way to see it. I strongly urge fans to check this one out. "Outlander" looks like it is going to be the "real-deal". If this clip doesn't get you excited about the film, nothing will."

You get to see plenty of the monster — known as the Moorwen — as two of the main characters, Kainan and Wulfric, venture beyond the Village walls and confront it.

You have to check this out - HERE 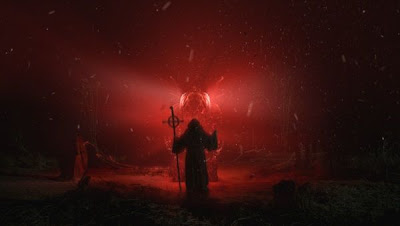 Don't know anything about, "Outlander"? Okay, here is the scoop:

Outlander has taken a long time to reach the screen. The original script for the film was written by director Howard McCain back in 1992 when he was a student at New York University. Many studios expressed interest in the project and then backed away before The Weinstein Company gave the film a green light in 2004. The film again went through some more delays, but finished shooting in January of 2007. Again there was another lapse in time before the film made its debut at the Berlin Film Festival.

The plot for the film is very intriguing. James Caviezl stars as the alien Kainan, who crash lands on Earth in Viking era Norway. His cargo, the giant monster known as the Moorwen, escapes the crash and begins to exterminate the Vikings. The situation forces Kainen to form an alliance with the famed warriors in attempt to defeat the creature. Can Iron Age weapons combined with alien tech be enough to stop the monster's rampage?

The film boasts an all-star cast that includes Sophia Miles, John Hurt, and Ron Perlman. Outlander also has a good list of people behind the camera as well, headed by producer Barrie Osborne who also worked on the Lord of the Rings trilogy and The Matrix trilogy.

See Also: The Movie Poster For Outlander Revealed / Outlander - What Could Be Cooler Than Vikings And An Alien Fighting A Giant Monster?
By Ken Hulsey at November 20, 2008