Tennant's Doctor Making The Move From TV To Big Screen 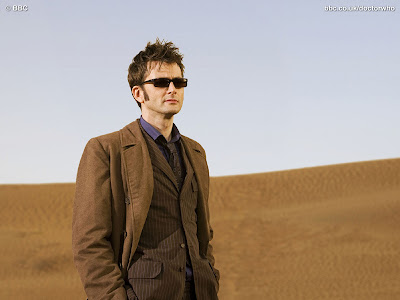 It seems that David Tennant is making sure that his incarnation of The Doctor will continue on despite his leaving the popular UK television series. It appears that the actors decision to leave the show last year may have just been an attempt to clear his schedule so he could star in a series of Doctor Who movies.

Hot on the heels of the news that Tennant's Doctor would be making a special appearance on the spin-off series, "The Sarah Jane Adventures", comes a report from Britain's Daily Express stating that the actor is well into negotiations to star in a movie based on the "Doctor Who" television series.

Their unnamed source explains, "The script is still in the early stages but David wants to be in the film. There have already been discussions and David needs to feel the story is right but right now things are looking very positive."

"He understandably wants to go off and do different roles but he still loves "Doctor Who." If the film takes off and there's demand for more, he can continue to play the Doctor occasionally without having the pressure of the relentless schedule that the TV series demands."

Tennant announced in October he would be stepping down from the role after three years as the time traveller, passing the baton to newcomer Matt Smith.

These new "Doctor Who" films will not be the first big screen exploits of the infamous Time Lord. Peter Cushing played the Doctor in the 1965 film "Doctor Who and the Daleks", and it's 1966 sequel "Daleks' Invasion Earth: 2150 A.D."

In the 1970s an attempt was made to produce a "Doctor Who" movie starring Tom Baker called, "Doctor Who and the Scratchman." That film came close to production, but funding fell through at the last minute.