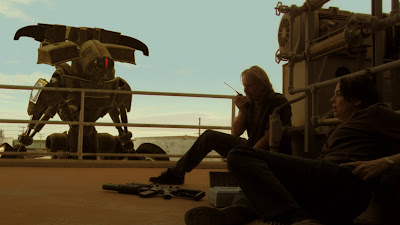 Written By: Ken Hulsey
Sources: Paul Bales / Avery Guerra
I know most of you out there just can't wait to see "Transformers 2", but I really don't have any interest in seeing the movie. I thought the first one was awful, and from what I'm reading online, the sequel sounds like more of the same Micheal Bay crap.
I know, I'm in the minority here.
Well, if you are part of the small group that I belong to, or you just really love giant robot flicks, there is an alternative to the main-stream "Transformers" CGI cluster f**k out there. The Asylum is releasing their own giant transforming robot film, called "Transmorphers: Fall of Man".
I know what your thinking, "Transmorphers?, oh please". True, the name does make you think that this is just a cheap rip-off film, and the fact that it features transforming robots just about seals the deal, but the plot is very different from "Transformers."
Yes, "Transformers" has a plot, something I hear "Transformers 2" is in short supply of.
The film follows the story of a group of freedom fighters who try to stop the invasion of Earth by a bunch of alien robots.
The film will be released on DVD on June 30th and it can be ordered through Amazon.com (See Below)

Paul Bales from The Asylum was kind enough to send us over a couple of photos from "Transmorphers: Fall of Man": 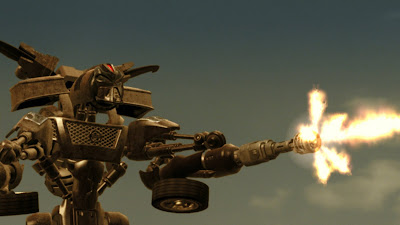 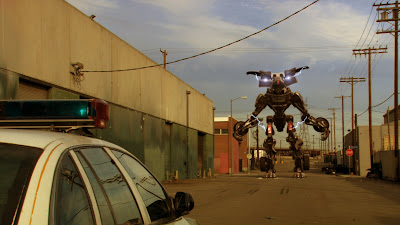 See Also: Not To Be Confused With Transformers - The First Trailer For Transmorphers Fall Of Man / Transmorphers Fall Of Man: Transforming Cell Phone Effects Shot / An Early Effects Shot From Transmorphers The Fall Of Man / Mega Shark vs Giant Octopus: How Big Is Too Big? / Its An Aquatic Monster Free For All In Mega Shark Vs Giant Octopus.....Oh And Debbie Gibson / DVD Art For The Land That Time Forgot / The Trailer For The Asylum's Terminators / The First Photos From The Land That Time Forgot / The Land That Time Forgot Remake Begins Filming / The Trailer For Asylum's Dragonquest / Exclusive Images From Asylum's The Terminators / The Top Ten Hottest Monsters Of 2008 / New Photos From Next Weeks Big Monster Movie Release / Monster (2008)
By Ken Hulsey at June 26, 2009