The First Look At Demonfoot From The Bloody Rage Of Pigfoot...I Mean Bigfoot 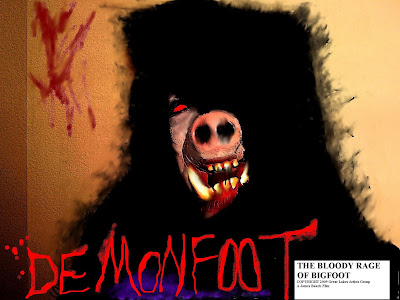 James Baack still hasn't released a clear picture of the Sasquatch from his super violent horror movie, "The Bloody Rage Of Bigfoot", but he has sent us a picture of the monster who will go toe-to-toe with the famous cryptid Steve Austin style. Let me introduce you to "Demonfoot," the half-pig-half-Bigfoot protector of the two young girls seen in the films trailer.

Deomonfoot and Bigfoot are going to duke it out at the climax of the film, a scene that Baack has just completed filming.

Along with the new publicity shot, the director also gave us an update on the filming so far. Baack explains," Filming has been going well and we shot a Major scene Tuesday night that involves the Witch (Satantha) beating a news reporter to a bloody pulp with a broken tree log."

" Also, we completed the "fight scene" between Bigfoot and Demonfoot."

" We are going to introduce a new character to the story next week when we film. The characters name is "Sugarbad Jones", he is a sort of Ghost Hunter /Expert in the Occult / Cryptozooligist. His main objective in the film will be Hunting down Demonfoot and sending him back to Hell."

" We have a way to go but we are getting there."

Those of you that have been following this one now that it looks like one hell of a wild ride. I can't wait to see what kind of craziness James Back cooks up next!