Satantha Cuts Through The News - The Bloody Rage Of Bigfoot 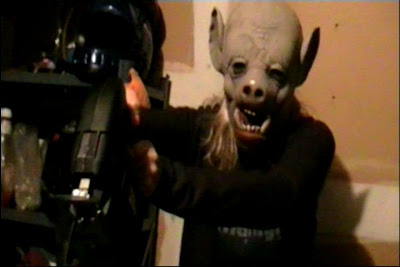 You know, some celebrities just don't know how to handle the paparazzi. They are always getting in fights with them or trying to run away from them. Well, the character Satantha ( aka Demonfoot) in James Baack's upcoming horror film, "The Bloody Rage of Bigfoot", knows just how to handle a nosy reporter. She simply cuts him up into little pieces with a jigsaw. It's not a very passive way to handle a unwanted visitor, but someone needed to start putting the press in check.

For those of you who don't know much about Satantha, well what can you say, she is just your typical Witch who likes to wear a pig mask and a guerrilla costume and dabbles in serial killing.

Sounds pretty whack, I know, but underneath the swine mask and fur is the lovely actress Andrea Hutchison who is very easy on the eyes.

Thanks to James Baack for sending along this very first still from his film, "The Bloody Rage of Bigfoot."