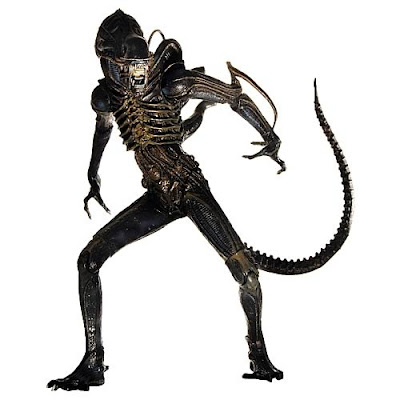 They mostly come out at night... mostly.
Can't get enough Aliens?
This will send chills down your spine!
It's almost too realistic!

Over 20 years after the original release of Aliens, fans still can't get enough of the unforgettable watershed movie! This startling, 7-inch rendering of one of the horrifying stars of this cinematic masterpiece is made of plastic and nicely articulated. In 1986, audiences were terrified by James Cameron's follow-up to the original sci-fi / horror classic. Today, this Alien will bring chills to your spine once more as you gaze into the intense detail of the almost-too-real action figure!

The Alien, also called the Xenomorph,is a fictional endoparasitoid extraterrestrial species that is the primary antagonist of the Alien film series. The species made its debut in the 1979 film Alien, and reappeared in its sequels Aliens (1986), Alien 3 (1992), and Alien Resurrection (1997). It has also appeared in the series' two spinoffs Alien vs. Predator (2004) and Aliens vs. Predator: Requiem (2007), as well as the series' subsidiary literature and video games.

Unlike many other recurring enemy extraterrestrial races in science fiction, the aliens are not an intelligent civilization, but predatory creatures with no higher goals than the propagation of their species and the destruction of life that could pose a threat. Like wasps or termites, aliens are eusocial, with a single fertile queen breeding a caste of sterile warriors.

The aliens' biological life cycle, in which their offspring are violently implanted inside living hosts before erupting from their chests, is in many ways their signature aspect. Their design deliberately evokes many sexual images, both male and female, to illustrate its blurring of human sexual dichotomy.

The alien design is credited to Swiss surrealist and artist H. R. Giger, originating in a lithograph called Necronom IV and refined for the series' first film, Alien. The species' design and life cycle have been extensively added to throughout each film.