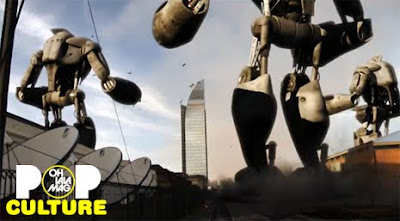 Do you remember about a month ago when I posted the cool video from Uruguay called, "Ataque de Pánico!"?

You know, the one about the little boy and the army of giant robots that blow a town to bits.

I thought you would.

Well, come to find out that it wasn't just us folks here at Monster Island News who were oooing and awing over the short film, a bunch of robot loving geeks in Hollywood, with big wallets, were getting all worked up too.

Almost as soon as special effects man, and film maker, Fede Alvarez posted the clip to Youtube, he, and collaborator, Aparato Post, found themselves being overwhelmed with big-time offers from Hollywood studios wanting to turn their little project into the next "District 9".

To make a long story short, it was Sam Raimi who won out by plunking down $30 million to secure the rights for his Ghost House Pictures.

That's quite a financial turnaround for Alvarez and Post who took a whopping $300 out of their own pockets to produce the the five minute "Ataque de Pánico!".

According to sources, Raimi still wants to keep a South American feel for the film, planning to film it in both Argentina and Uruguay.

If Alvarez and Post could produce those kinda effects with just $300, just imagine what they could do with millions of dollars?

Look for this one to be spectacular.....that is, if they can come up with a good back-story to along with the robots blowing the sh*t out of Uruguay.

Here's the clip that started it all: