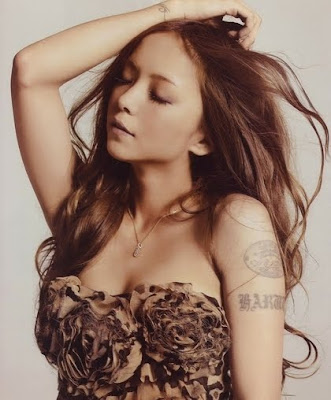 This years 30th anniversary of the animated series "Gundam" is quite a 'big deal' in Japan. and from all the happenings in the 'land of the rising sun' it is easy to see how the show has impacted that countries pop culture.

When "Gundam" first aired, way back in 1979, there was one little girl who was mesmerised by what she saw. That little girl is all grown up now, and has fans of her own. I am, of course, talking about 32-year-old, Japanese pop star, Namie Amuro, who has chosen a special way to celebrate the 30th anniversary of the show she loved so much as a child.

For the first music video from Amuro's latest album, entitled 'Past Future', the vocalist took a look back at the original "Gundam" series. In the video, for the song 'Defend Love', pop star Namie Amuro goes toe-to-toe with the classic hero Amuro Ray.

This past summer, Sunrise, who produces the "Gundam" series, agreed on the collaboration which features both characters and mecha from the shows early days, along with an animated Namie Amuro, who now has the distinction of being the only living person to enter the "Gundam" universe.

"Past Future" went on sale this past Wednesday in Japan.

Here is the video: