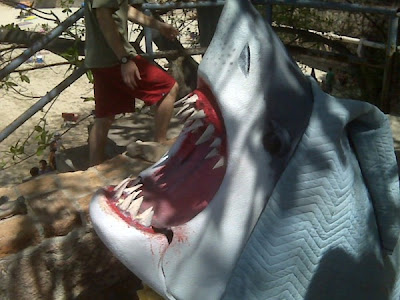 How do you combine a shark with an octopus? And how could such a biological pairing occur?

These are the very questions that were recently put in front of legendary cult film maker, Roger Corman, when he was approached by the SyFy Channel to develop a made for TV film called, 'Sharktopus!'

Even before Corman could begin to figure out how to meld two of the ocean's greatest predators into one, the network hit him with another idea. Combine a shark with a dinosaur. That movie, called "Dinoshark", aired last weekend on SyFy.

"'Sharktopus!' is more difficult because you can imagine a prehistorical crocodile like the Dinocroc, but there's no such thing as prehistoric half-shark, half-octopus," Corman said. "I tried to figure out how to do this."

"It's fairly difficult to believe, but we only ask the audience to accept this one thing," he said. "After that, we take great care that everything else is logical from then on and is something that could happen."

May be a bit convoluted, but don't blame Corman, it's not that easy to figure out how to make these genetic abominations fly.

Today we have the first look at Corman's shark-octopus hybrid as it arrived on location for filming. Granted the image doesn't reveal very much about the overall look of the thing, but at least we know that it is 'shark-size' instead of hundreds of feet long, like the kind of creatures The Asylum has been coming up with.

Speaking of Corman, the legendary film maker will be appearing on Cult Radio A Go Go, tomorrow to talk about 'Sharktopus!', and his long career in film making.

Check that out at: http://www.cultradioagogo.com/welcome.html

There is yet another radio interview with Corman from KROQ radio, here in Los Angeles: http://kroq.radio.com/2010/02/24/damn-you-sharktopus/

And if you really feel ambitious, here is a Facebook group you may want to check out: http://www.facebook.com/group.php?v=wall&ref=mf&gid=338907011947

That should keep you busy for at least fifteen minutes. The rest of the day is up to you.