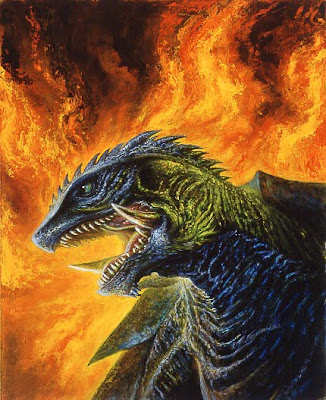 Little did I know that when I was writing an article on Retromedia's DVD release of "Destroy All Planets" that it was going to be like pulling the pin on a hand grenade.

And now I can't put the pin back in.

Soon after I posted my article Armand Vaquer responded with a follow-up that reported on some concerns voiced by fans on just about every monster related message board that the Retromedia release may possibly be facing a legal challenge from Kadokawa Pictures who own the rights to the Gamera film series stemming from their purchase of Daiei, the studio that produced the original film.

In the spirit of fairness, I extended an open invitation to Fred Olen Ray of Retromedia to address many of these concerns/questions with a letter or article.

As of the time of this posting, Ray has not responded to invitation, though I should point out that I gave him a vary narrow window in which he could get his response to me and it may be still forthcoming, so please don't try to read anything into that.

If it comes in, I will post it here.

I think what needs to be pointed out here is the simple fact that it is not up to us fans to try and determine if Retromedia has the legal right to sell "Destroy All Planets" on DVD or not. That is up to Kadokawa Pictures, Retromedia, and most importantly, their legal representation to hassle over.

Long story short, Ray is a businessman and Retromedia is a business and generally speaking a company the size of the DVD manufacturer doesn't try to take on a major motion picture company like Kadokawa unless they legitimately believe they are in the right. Of course, some foolishly do, and end up forking out a big hunk of money in the precess.

It doesn't make any sense from a business stand point simply because no matter how many DVDs Retromedia may sell of "Destroy All Planets" it couldn't possibly add up to the legal fees and fines they could be saddled with if they loose a lawsuit to Kadokawa.

Trust me here, if the Japanese film maker believes that Ray and Retromedia are selling something that they own the rights to, a lawsuit will be coming very quickly. These are kind of situations copyright lawyers dream about.

Ultimately the only parties that now the whole story here are Retromedia and Kadokawa.

I should point out that since the aforementioned articles went to press, I have gotten e-mails to back up Fred Olen Ray's character and his company, which echo his claims that he has done nothing wrong in this case.

That may be very well be true.

I personally have had interactions with Ray and he does seem like a straight-up guy, but that only leads to the assumption that he hasn't acted with malice in this situation.

Which he very well may not have.

When it comes down to the bare facts, either Kadokawa will challenge this release of "Destroy All Planets" or not, and if they do it will be up to court to determine who legitimately owns the copyright.

It should be noted that so far, to my knowledge, the Japanese film company has not challenged any of the prior DVD prints of the Americanized versions of any of the Gamera films, namely from Alpha Video.

Read into that as you may.