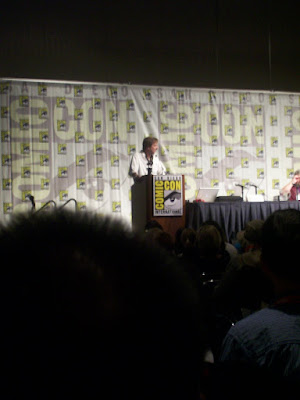 My experience at the San Diego Comic Con was much different than that of the typical fan. I had a specific agenda that, unlike most people, didn't include any of the mainstream movies or television shows that everybody was going absolutely gaga over.

While just about everyone was going ape over presentations like the "Green Hornet", "True Blood" and "Big Bang Theory" presentations. I, however, was all geeked up about seeing a presentation by cartoonist Berkeley Breathed.

To the shock of just about everyone who lined up to see the presentation put on by the humorist, who rose to fame in the 1980s with his syndicated comic strip "Bloom County", the ballroom (6a) was packed to capacity.

This came to the surprise of Breathed who admitted that he rarely attends conventions and really didn't think that many people remembered his work.

Just prior to the event a representative of Comic Con presented Breathed with the coveted "Inkpot Award", a special honer given to those who have become icons in the field of comics.

The illustrator/writer, who had also received a " Pulitzer" for his work on "Bloom County", admitted that he really didn't know just what his fans would want to see, so he brought along a bunch of slides and three promo videos from the unmade "Opus" movie from Miramx.

Here are a few of the highlights from the presentation, a few items that "Bloom County" fans have never seen before. 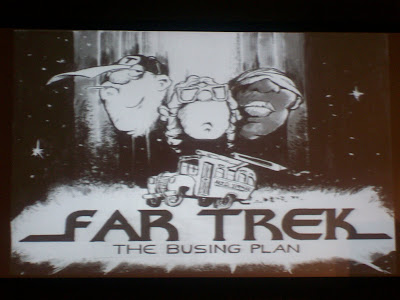 Here is the first ever Berkeley Breathed cartoon, which appeared in the Austin American-Statesman way back in 1978. This was the one and only illustration that he ever did for the paper who didn't care much for the comparison of the cities busing plan to "Star Trek".

Breathed was reportedly, 'thrown out on his ear', after the strip was published. 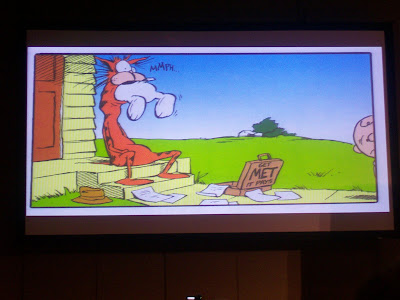 Breathed used this image to illustrate how cartoonists poke fun at each others work as a matter of respect. Here Breathed used his creation "Bill the Cat" to rib "Peanuts" creator Charles Schulz about selling the rights to his beloved characters for use in television commercials, namely the insurance company "Met-Life". 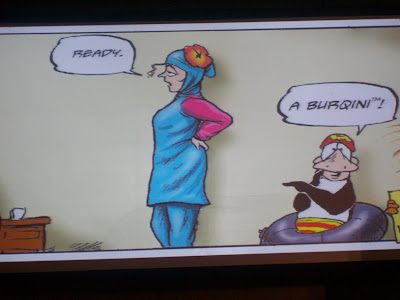 Here is the one comic strip panel that convinced Breathed to retire. When a publisher spent an entire evening on the phone with the artist arguing over how the few strands of hair on this woman of Middle Eastern decent looked, he knew it was time to quit.

Apparently the publisher was worried that if the hair looked 'scraggly' then it would be perceived that the woman was 'dirty', too straight and then the strip could be considered 'sympathetic' to Muslim extremists.

Breathed noted that back in the 80s this kind of stuff would have never been an issue. 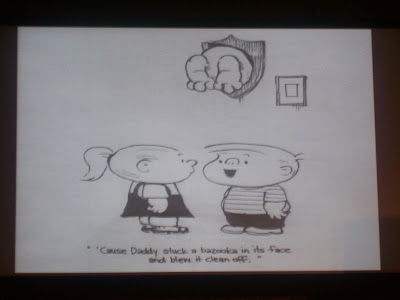 Here is a cartoon that Breathed sent to "Family Circus" creator Bil Keane. When cartoonists correspond with each other they always include a humorous satire of the others work. 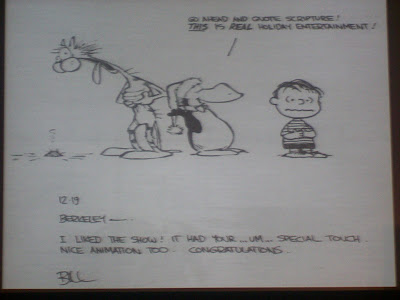 Here is what Bill Watterson of "Calvin and Hobbes" sent to Breathed after the Christmas special "A Wish For Wings That Work" aired along with "A Charlie Brown Christmas" in 1991. 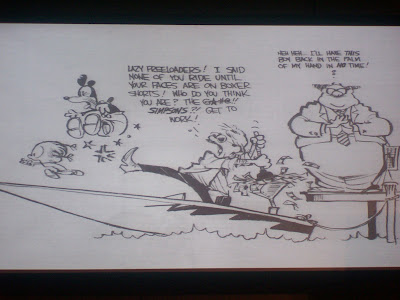 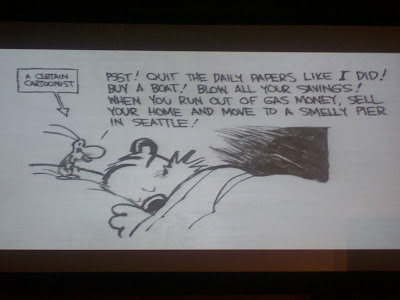 Here Breathed urges Watterson to leave cartooning and follow in his footsteps. 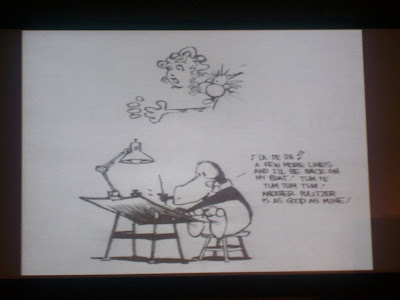 Yet, more playful ribbing by Watterson.

The real highlight of the presentation was the three promo clips from the unmade Miramax "Opus" movie. In the clip above you will recognize the voice of "Monty Python" alum John Cleese. Opus is voiced by Joe Alaskey, who also took over for Mel Blanc as the voice of Daffy Duck.

I apologize for the quality of the video above. It is, of course, a bootleg that I shot. Near the end, the comic con staff made me stop filming.

I wish that I could have shared the last of the three clips, which was absolutely hilarious. In that one Opus, who is voiced by David Hyde Pierce, who is working at a 'old school' diner, feels compelled to pull up the pants of a couple of rather large truck drivers. Let us just say that Opus gives into temptation and gets more than he bargained for.

During the presentation Breathed also talked in length about his very successful children's books, including "Mars Needs Moms!", which is being made into an animated feature by Disney. Look for that one to be released on March 11, 2011.

Though Breathed will undoubtedly be remembered for his children's stories that are now being made into films, it is "Bloom County" that, in my mind, will always be his most important work. The strip was a great satire of the events that took place during the 1980s and 90s. If anyone truly wishes to experience what was going through the minds of people during those two decades they need look no farther than the panels of Berkeley Breathed's strip.

Opus, Bill the Cat, Steve Dallas and the rest of the motley "Bloom County" crew have brought hours of laughter to millions, including myself, and will continue to live on through a future compilation which is in the process of being assembled for future publication.