After Waiting 21 Years, THE CREATURE FROM LAKE MICHIGAN Is Finally Ready To Rise 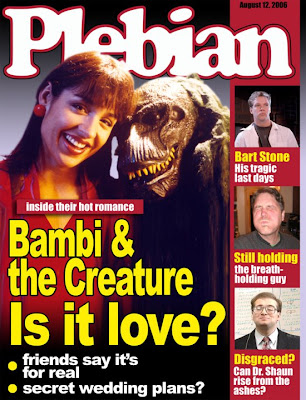 Film maker Jim Hardison is the poster-boy for patience. Most people in the film industry, eventually, abandon movies that they can't complete after a few years, but not Jim, oh no, he has been working on "The Creature From Lake Michigan" for twenty-one years.

Hardison started, and actually filmed the bulk of this baby, way back in 1989, before his funding ran out and his partners went their own separate ways.

Though, seemingly destined to disappear forever, "Creature" stayed on the Chicago area film maker's mind, and despite the odds against it, he vowed to one day complete the project.

Well, that day has finally come, and Hardison's little monster movie that could, is now completed.

The story for "Creature" isn't new, no pun intended, a group of B monster movie makers come across a 'real' monster while filming their cheesy flick. We've seen that one a zillion times, but Hardison has added a few more plot points to his film, that should separate "Creature" from all the other creature films that have proceeded it ........ actually come after it? ........... you get the idea.

Here is a great interview with the movie maker that never gives up, Jim Hardison, by our very own Avery Guerra:

Avery Guerra: Can start by giving us a little bit of history about yourself?

Jim Hardison: I’m a writer and the creative director for Character, a Portland-Oregon-based company that does story analysis for brands and entertainment properties. I’ve worked as a writer, animator and director in commercials and entertainment since graduating from Columbia College of Chicago in 1988.

I started my professional career by producing the super-low-budget film The Creature from Lake Michigan. The Creature cost $30,000 to shoot in 1989, most of that invested by various members of my family. It was intended to be the first in a series of direct-to-video feature-length films that would launch a movie studio in Chicago, Nocturnal Pictures. Things did not work out as planned. Instead, it was more like a slow-motion train wreck. The shoot was grueling, we got in trouble with the Securities and Exchange Commission, we ran out of money during post-production and Nocturnal Pictures dissolved into in-fighting between its partners.

Ultimately, The Creature from Lake Michigan was put on hold as I scrambled to find a way to make enough money to finish the film. I wound up co-founding my own production company, Image Dynamics, with the cinematographer from The Creature. During Image Dynamics’ seven-year run, I wrote, directed and edited live-action and animation productions, including educational films, television commercials and television pilots. Instead of providing an opportunity to finish The Creature, running Image Dynamics kept me so busy I barely had time to think about the film.

By 1997, exhausted from running my own shop and interested in shifting my focus exclusively to animation, I moved to Portland, Oregon to join the world-renown dimensional animation company Will Vinton Studios, pioneers of Claymation and creators of the California Raisins. There I directed on the animated TV series Gary and Mike, as well as working on commercials, including spots for M&M’s, AT&T, Cingular Wireless, and Kellogg’s. While working at Vinton, I also co-wrote the television special/Lion’s Gate DVD release, Popeye’s Voyage: The Quest for Pappy with actor Paul Reiser.

I co-founded Character in 2000 to help brands get a better handle on their stories. While working at Character, I’ve given story advice to many of the world’s largest brands, including Discovery Networks, Target, Verizon, Samsung, McDonalds and Walmart, and helped to hone brand characters, including the Trix Rabbit, the Jolly Green Giant, Tony the Tiger, the Pillsbury Doughboy and Ronald McDonald. I’ve appeared on The Apprentice as an expert advisor on brand characters, I’ve written for the Emmy Award winning PBS children’s television series SeeMore’s Playhouse and I authored The Helm, a graphic novel for Dark Horse comics that was named one of 2010’s top ten Great Graphic Novels for Teens by YALSA, a branch of the American Library Association.

During all that time, I hung onto the 20,000 feet of negative and the original audio recordings for The Creature From Lake Michigan, not sure that I would ever get back to it, but unable to let it go. In 2005, a friend of mine got a job at a film transfer company in Portland and jokingly asked if I had any film I needed to transfer. I started right away, transferring after hours in order to get cheaper rates. From there, I began the painstaking process of re-cutting the film digitally. Now, five years later, I’m finally finished.

AG: Now can you tell us a bit about how this film came about and why we are just seeing it now?

JH: The Creature was basically a hair-brained scheme to break into the movie business without having to leave Chicago. I hatched the plan to make the film with three fellow students from Columbia College. Back in 1989, the home video market was very lucrative. A VHS cassette of a feature film sold for an average of $49,000 and we figured that if we could produce a good enough looking film cheaply enough, we could earn back the budget, plus enough to make a second film. With the benefit of hindsight, it was a pretty naive plan. We shot on 16mm film for 30 days in a row using mostly equipment from Columbia College. Our cast and crew worked on deferred compensation contracts, and we built or borrowed virtually everything that appears in the film.

Unfortunately, we didn’t really budget anything to post the film. Back in those days, films had to be cut on film, which was an expensive process because it was labor-intensive and required the renting of specialized editing equipment.

We’d all quit our jobs in order to focus on making The Creature, and we consequently ran out of money pretty quickly. On top of that, the four-person production team had a fairly major falling out that basically destroyed Nocturnal Pictures. Even broke and without a company, we managed to get The Creature From Lake Michigan edited and almost finished before we finally had to shelve it in order to get some real work and stay alive. Once it was on the shelf, it was incredibly hard to get back to it. I could never quite let it go though, because I felt this huge debt to everyone who had worked on, acted in and invested in the film.

AG: What inspired you to go back and revive the project? What has the experience been like?

JH: It always bothered me that the film was never finished. First, I’d spent several years of my life working on it, ruined some good friendships over it and exhausted my savings trying to complete it. Second, I’d spent a lot of my parents and my brothers’ and sisters’ money on it. When I hit the 15-year anniversary of the production, it just felt like time to get the thing done. Of course, I had no idea it was going to take me another five years and tens of thousands of dollars to complete.

It’s been a pretty strange experience, finishing the film. Not only is it like a flash-back to my youth, but there were so many hopes and dreams tied to it when we first started that it continually dredges up weird feelings for me. Ultimately though, it’s been a massive relief to finally get it done. Not having it finished was like carrying around a big load of guilt for 21 years. It’s good to be out from under that weight, and it’s very satisfying to have the film finished.

AG: Do you think it has stayed particularly relevant in today’s world?

JH: The film is dated looking. It was shot in 1989 and it looks like the ’80s in all their glory. At first, I thought of that as a negative, but the people who have seen the film all seem to get a kick out of its look and feel. They tell me that the clothes and the hairstyles add to the humor and charm of the movie. But getting past the look, it’s kind of funny how relevant the ideas still are, even though we came up with them two decades ago. First, the main character is an environmental activist who is fighting to clean up pollution in Lake Michigan. Those kinds of environmental issues have gotten more pronounced over the intervening years, and with the recent BP oil spill, it seems pretty on target for today. Next, there are themes of love, greed, betrayal and fame – and I think those story elements are universal and timeless.

JH: Of course when I talk about it like this, it sounds like the movie is a serious film – or like the environmental aspect is a commentary. It’s not. The film isn’t serious. Not at all. It’s a super-low budget comedy/horror/spoof that was intended to look and feel like a “B” movie. It’s very over the top and ludicrous.

AG: What does it have to offer to today’s audiences and do you feel they will be able to enjoy and appreciate the film?

JH: Hopefully, people will enjoy it as a light, silly bit of entertainment. It’s not deep. It’s not a work of staggering genius. I look at it and mostly see the flaws, the sweat and the blood that went into it. It’s hard for me to get past that to assess how the film really is–but the folks I’ve shown it to seem to get a kick out of it–which is all that we intended from the start. It’s not great by any stretch, but hopefully, people will get a laugh out of it.

AG: What’s next — as in: what does the future hold for you and your filmmaking career?

JH: Apart from The Creature, I haven’t really done any film production work in about ten years. I’ve continued to write an occasional screenplay here and there, and I even wrote and produced a short film a few years back, but mostly I’m focused on other kinds of writing. In addition to my branding work – which is really my full time gig – I’m continuing to write comics and I’m putting the finishing touches on the manuscript for a novel. Of course, finishing The Creature has been like a second full-time job over the last five years. Who knows what I might get up to now that I’ve got it off my plate?

AG: Thanks for your time and generous consideration of these inquiries. In closing, is there anything you’d like to add?

JH: Just two final notes. The first is that, despite the fact that the film turned into a slow-motion disaster, that nothing turned out the way it was intended and that it killed some good friendships, I also met my future wife on The Creature. She was my production manager and I fell in love with her while sewing costumes for a musical number in the film. We’ve been together 21 years now and have two lovely kids. If it hadn’t been for The Creature, we never would have met.

The second is that, as I started to get close to finishing the film, I began tracking down as many of the cast and crew as I could find, just to tell them the film was done and to see if I could send them copies. As part of that effort, and with some serious trepidation, I managed to locate several of my old business partners, neither of whom I’d spoken to in over a decade. I’m happy to say that we’ve reconnected and put the past unpleasantness behind us. So, although it’s not the ending I was intending all those years ago, it’s still a happy one.

Here is the retro trailer (this was filmed in 1989 remember) and publicity photos from "The Creature From Lake Michigan": 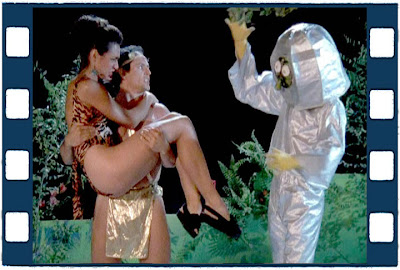 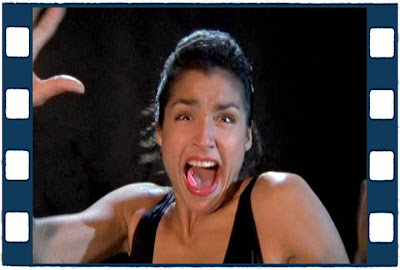 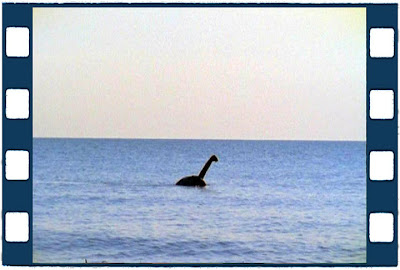 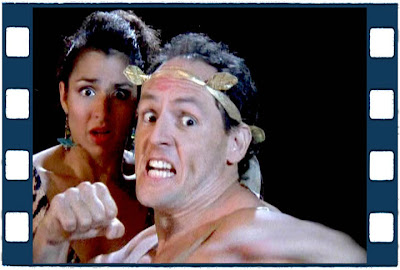 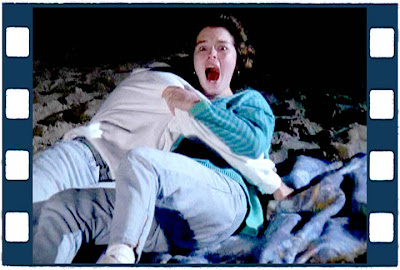 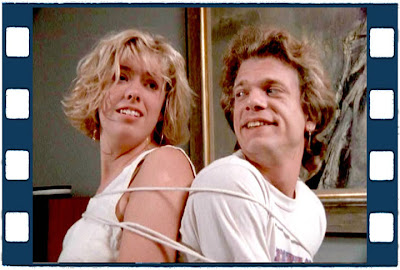 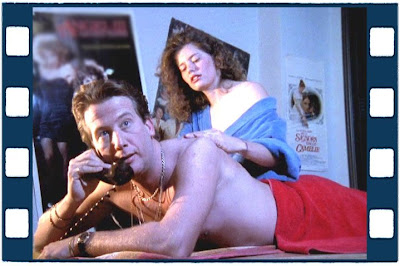