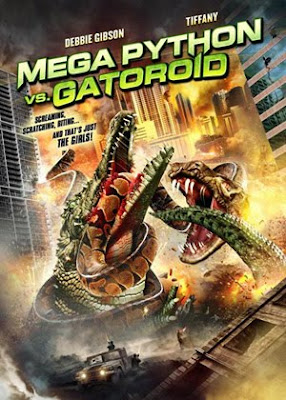 In what promises to be the television movie event of 2011, 1980s singing sensations Debbie Gibson and Tiffany get down and dirty in their long-awaited pop princess smackdown when they co-star in the ripped-from-the-headlines Syfy Saturday Original Movie, Mega Python Vs Gatoroid, which will premiere Saturday, January 29, at 9PM (ET/PT).

A production of The Asylum, Mega Python Vs Gatoroid takes an up-close-and-personal look at the crisis in the Florida Everglades where invasive Burmese pythons are threatening the indigenous alligator population. Gibson portrays a fanatical animal rights advocate who spends her evenings “liberating” illegally imported exotic snakes from pet stores and setting them free in the Everglades, where the pythons grow and thrive.

Tiffany plays an over-zealous park ranger worried about the growing ecological damage. To save her beloved alligators, she’s willing to employ dubious methods, overdosing them with steroids so they grow mega, setting off a war between the species – and putting her on a collision course with Gibson.

Mary Lambert (Pet Sematary) is director of Mega Python Vs Gatoroid – the first time a woman has directed a Syfy Saturday Original Movie. The writer is Naomi Selfman (Evil Eyes). 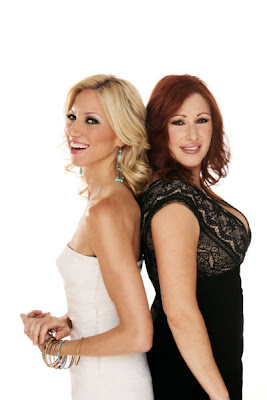 Tiffany at age 15 was the youngest female artist to have a #1 debut album. Her global smash hits include I Think We’re Alone Now, Could’ve Been, I Saw Him Standing There, and All this Time…selling more than 15 million records worldwide. To this day, her groundbreaking “mall tour” sets the precedent to launch young musical careers. Venturing into acting, Tiffany starred as the voice of “Judy Jetson” in Jetsons: The Movie and has appeared in many award winning indie festival films. In 2002 Tiffany graced the cover of Playboy; her pictorial became one of the best selling issues of all time. Her album The Color of Silence was named “one of the finest pop albums of 2000” by Billboard. 2007 marked her return to the Billboard charts with three Dance Hits. Tiffany makes her home in Nashville with her husband and son, and is currently writing and recording her country music debut.

Debbie Gibson began her career at 16 with the hit Only in My Dreams. She has sold 16 million albums and still holds the world's record for being the youngest writer/producer/performer of a #1 hit. She went on to star in critically acclaimed Broadway shows such as Les Miserables, Beauty and the Beast, and Cabaret, among others. She originated Sandy in the West End revival of Grease, breaking box office records. Gibson received rave reviews for her sold-out, one-woman show, Pop Goes Broadway, with critics calling it "the best show of the year at Harrah's." She also guest starred in Cirque Dreams Jungle Fantasy at MGM/Foxwoods. Currently, Gibson runs her "Electric Youth" summer camp and music programs throughout the year to mentor young aspiring songwriters and performers, as well as awards scholarships through her “Gibson Girl Foundation.” She’s also a spokesperson for Murad, Inc. As the new spokesperson for Children International, she recently spent time in impoverished villages in Manila. Her new album for Sony Japan, Ms. Vocalist, is presently Top 10 in the Billboard Charts with the first single I Love You at #1. She will be doing a concert tour overseas in February 2011.

See Also: THE CHEETAH WHORES Score A Hit For SHARKTOPUS And SyFy / MEGA SHARK vs GIGANOTOSAURUS! Okay, Enough Is Enough! / The Trailer For The Asylum's 'Mega Piranha' - Get Ready To Laugh Your Butt Off! / Tiffany To Star In The Asylum's 'Very Brady' Megapiranha Movie / Traci Lords To Play The Princess Of Mars / The Dinosaurs That Time Forgot - New Photos And Trailer / Exclusive Pics From Transmorphers: Fall Of Man / Not To Be Confused With Transformers - The First Trailer For Transmorphers Fall Of Man / Transmorphers Fall Of Man: Transforming Cell Phone Effects Shot / An Early Effects Shot From Transmorphers The Fall Of Man / Mega Shark vs Giant Octopus: How Big Is Too Big? / Its An Aquatic Monster Free For All In Mega Shark Vs Giant Octopus.....Oh And Debbie Gibson / DVD Art For The Land That Time Forgot / The Trailer For The Asylum's Terminators / The First Photos From The Land That Time Forgot / The Land That Time Forgot Remake Begins Filming / The Trailer For Asylum's Dragonquest / Exclusive Images From Asylum's The Terminators / The Top Ten Hottest Monsters Of 2008 / New Photos From Next Weeks Big Monster Movie Release / Monster (2008)
By Ken Hulsey at December 30, 2010