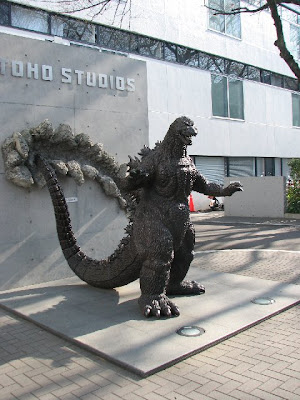 There's an article that appeared in the Pittsburgh Film Industry Examiner website alleging that there may be two Godzilla movies in 2012, one from Toho and the other from Legendary Pictures/Warner Brothers.

This article came to me last night courtesy of Google.

It was written by Fiore Mastracci and it contains so many factual errors that I was just going to ignore it and not post anything here about it. I did post the link to a couple of Godzilla fan forums and the reaction was predictable: universally panned.

The article claimed that Toho "announced" their plan to end Godzilla's "forced retirement" early (i.e., 2012). There's been no such announcement, otherwise we'd have been discussing it for months. Believe me, if there were such an announcement, fans would have been on top of it immediately.

Toho and Legendary Pictures came to an agreement on a new American Godzilla film last year (they had been in negotiations at least since 2009), so Toho wouldn't even consider undercutting the American production with a movie of their own. It doesn't make any business or logical sense.

I am pretty close to some of the Toho executives, and none have given any indication of such a planned Japanese return of the Big G. A fan posted a comment on Mastracci's article asking for the source of this. It will be interesting to see Mastracci's reply.

He even got the good and bad guys wrong in Godzilla, Mothra and King Ghidorah: Giant Monsters All-Out Attack (2001).

Mastracci seems to be a nice guy, but, unfortunately, his article is just erroneous.

Sorry, folks, there's nothing to see here. But if you insist, to read the article, go here.
By Armand Vaquer at January 14, 2011