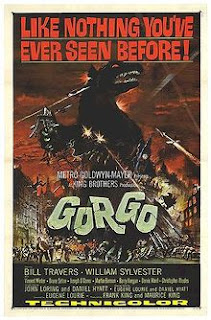 Today marks the 50th anniversary of the U.S. release of the giant monster movie, Gorgo.

It was on March 29, 1961 that "England's answer to Godzilla" was put into general release around the country.

The story: A giant dinosaur-like monster is captured off the coast of Ireland. It is taken to Piccadilly Circus in London, England for exhibition as "Gorgo."

What people weren't aware of, until it was too late, the monster was a baby. Gorgo's mother appears in Ireland and then follows its scent and attacks London to retrieve her offspring in Japanese-style suitmation and miniature work. 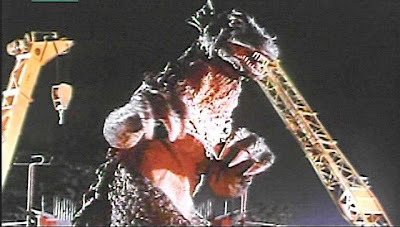 Gorgo starred William Sylvester and Bill Travers. It was directed by Eugene Lourie.

I remember seeing Gorgo at the Rio Theater (located at Western Ave. and Imperial Highway in Los Angeles) with my cousins. It was paired with Babes In Toyland (the Annette Funicello/Frankie Avalon version, not the classic Laurel and Hardy one).
By Armand Vaquer at March 29, 2011