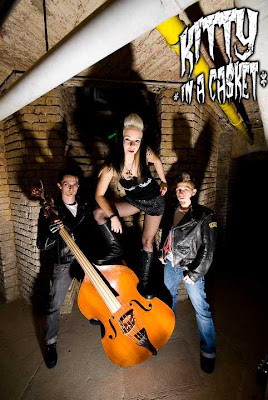 Yesterday I posted a rather long profile on the Danish rockabilly sensations known as The Horrorpops so I thought that I would continue along that line with another band that has really stated to grow on me, Kitty In A Casket.

Rockabilly is quickly becoming my music of choice these days an Kitty In A Casket, like The Horrorpops is a bass rattling trip to the other side fronted by a female vocalist, actually known as Kitty Casket, who can really belt it out.

Check out these titles, "Bride of the Monster", "Horror Express" and "Space Invaders". Good stuff no.

Kitty in a Casket came into being in autumn 2008, when Kitty and Billy decided to start a band together. That's when Bloody Lovesong and Canibal Paradise was written. Later that year they found an outstanding double bass player (Marc), as well as a drummer from hell (Mike) and immediately recorded their smashing debut album „Horror Express“, which came out in spring 2009 on the famous „billy“- lable CRAZY LOVE RECORDS. By that time lots of live shows and festivals have been played in all over Europe. In the same year, merely five months after „Horror Express“ was in stores, they released another fancy record „HalloWien“ on the most crucial of all fests: Halloween. Since then the sound of KITTY IN A CASKET got a bit harder, punkier and faster than on the debut- but not only that, also the vocals and the backing vocals are more unique and more sophisticated. After the release and a triumphant Halloween-show, KIAC found themselves a well- known double bass player, as Marc all of a sudden decided to quit the band. Slappin Suspender (Heiko), who plays also with P.O.X. and Mason Dixon Hobos now rocks the stage with Kitty. It won't take too long until new tunes will be produced by this talented and crative band. Until then be sure to attend one of their remarkable shows this year.

Here is sample of Kitty In A Casket tracks from Amazon.com:

Here are some music videos:

Kitty In A Casket photos: 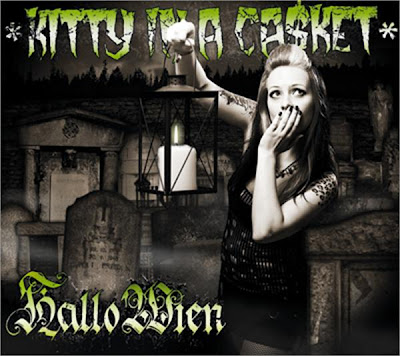 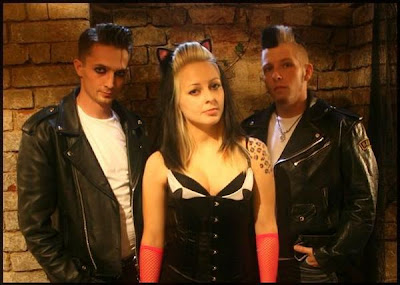 Tonight's the night you waited for
People want more and more
Now you'll get what you all need
We'll go for it, we are better than Speed

We'll be there play our show,
Show you what's rock and roll
Tonight will be special gig
This party will give us all the kick

You' won't believe your eyes
When you watch your boy die
And someone in the crowd shouts:
Hey ho, let's go

Surprise, surprise, now here's the clue
Right, what we want is you
We eat you alive tonight
Nothing ever felt so right

We love the smell of fresh meat
That's all we ever ever need
One sweet arm, a spicy chest
That's our wildest cannibal fest

You will run, you will hide
But you are caught inside

My cannibal paradise, my paradise
(repeat)

See Also: Horrorpops - Monster Music Profile / The Debut Of Celeste Cartier & Menage A Trois / Cuties For A Cause Blows The Elephant's Roof Off! / THE CHEETAH WHORES Score A Hit For SHARKTOPUS And SyFy / Godzilla Invades The Indie Rock Scene - "Lizard Song" By VIA AUDIO / Lita Ford Is Back - And She Wants To Know Your Wicked Fantasy / Just In Time For Halloween - New Monsterous Music From Prof. Morte And The Silver Scream Spookshow / KISS Celebrates 35 Years In Music With A Sonic Boom / New Hot & Sexy Photos Of Chase Masterson / The Yeah Yeah Yeahs - Heads Will Roll / It's Hot Rod Girls And Rat Rod Rockers To The Rescue!
By Ken Hulsey at April 27, 2011

Email ThisBlogThis!Share to TwitterShare to FacebookShare to Pinterest
Labels: Kitty In A Casket, Music, Rockabilly