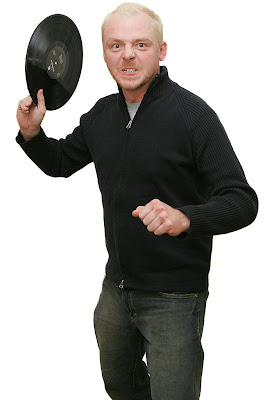 It would be fair to say that Simon Pegg believes that Hollywood has gone a little sequel crazy over the past decade or so, and who could argue with that honestly? In regards to his own films he feels that they speak for themselves and really don't need a follow-up story .... with the exception of possibly one.

Here is what Pegg posted on Twitter about a sequel to "Hot Fuzz":

"Does this mean Sgt. Nicholas Angel can come back to London? Because he doesn't want to. He's happy with Danny in Sandford

Then he posted about sequels in general:

"Where does this sequel obsession come from? Has our lust for the new been blunted by repeated pandering to childish desires for familiarity?"

Then to set the record straight:

"Didn't say sequels were a bad idea, far from it. Simply meant they're not always necessary. Certainly not with SotD & HF." (Shaun of the Dead & Hot Fuzz FYI)

Then he left the door open to the possibility that he could do a sequel to "Paul" but it would have to wait for other projects:

"I'd love to make a sequel to Paul. Nick & I had a funny idea but even if we started writing it 2day. With shoot and post it'd be 3 yrs min.

What I meant earlier is that it would take 3 years to get Pauls out from 2day, if we didn't have World's End to write and make, which we do"

"does that mean there will be a fourth season of spaced?"

Does any of this mean that a "Paul" sequel is one the way? No ... it doesn't but it also doesn't rule it out either. As we know if there is an idea brewing in someones head there is always a possibility that it may one day come to pass.
By Ken Hulsey at July 18, 2011