Talking About The CREATURE FROM THE BLACK LAGOON'S Texas Roots 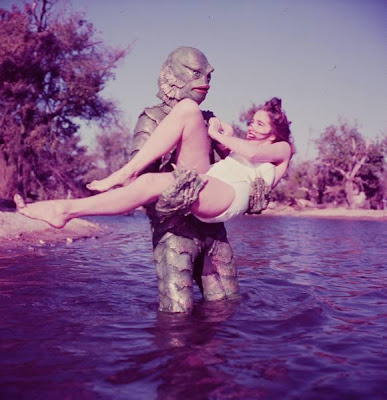 Well .... maybe not the monster itself but the man who played him underwater.

Everyone should know by now that I just love the "Creature From The Black Lagoon" so I decided to repost this article about Gil-Man actor Ricou Browning:

Ricou Browning is best known for his scaly, scary turn as the Gill-Man in the 1954 classic Creature from the Black Lagoon as well as 1955′s Revenge of the Creature and 1956′s The Creature Walks Among Us. But few know that in the ’50s he also made a bit of a local splash as a physical training instructor at Lackland Air Force Base, where he put servicemen through the pool and other paces.

Browning is back in the Alamo City this week for San Antonio Horrific Film Fest 4, the indie horror flick festival that runs Thursday through Sunday at Alamo Drafthouse Westlakes.

These days you don’t have to swim laps or scream to the rafters to win Browning’s favor. After all, he’ll be the first to tell you his iconic role didn’t exactly make him an overnight sensation.

“After the picture was made and released, I’d say 20 years passed and I started getting some letters,” says Browning, now 81, crediting the late fame to the movie’s later TV broadcast.

It wasn’t just because Browning had an un-credited role as a masked amphibious humanoid. He only played the Gill-Man for the films’ underwater sequences, while other performers like Ben Chapman played the Gill-Man in more memorable on-land shots. Still, it was necessary work for a movie about a fish-man out of water. And Browning was perfect for the job.

The Florida native had a background in water shows, having taught the mermaid performers at Weeki Wachee Springs how to perform their underwater magic. When the folks behind Black Lagoon saw Browning flip his own feet in the water, he got the creature gig.

“The way the creature swims is the way I swim,” Browning says, noting that he breathed from an air hose then held his breath for his underwater creature scenes.

Browning would leave Gill-Man behind but stick with the wet. He went on to produce 1963′s Flipper and write for the subsequent TV series, plus direct two of the underwater sequences for the Bond films Thunderball and Never Say Never Again and do miniature work for 1980′s Raise the Titanic.

“I didn’t find (filming) underwater as any different than filming upside,” Browning says.

Just what you’d expect from a guy who’s made a monster of a career in and around the water. 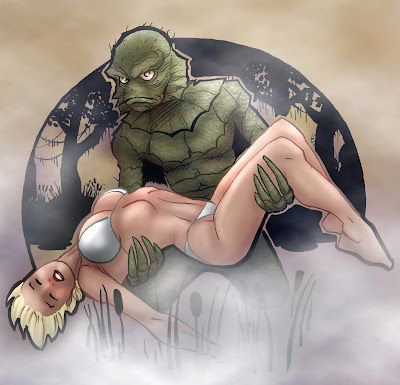