An era has come to an end.

Leonard Nimoy attended what he says was his last Star Trek convention Sunday in Rosemont, Ill. The 80-year-old, best-known for playing Mr. Spock in the original TV series, formed four fingers into a V for Vulcan sign and intoned Spock’s most famous phrase: “Live long and prosper."

However, the Fox News.com's blurb on the Nimoy story has his Trek character slightly wrong: 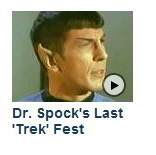 Dr. Spock was a famous baby doctor who died years ago.
By Armand Vaquer at October 04, 2011