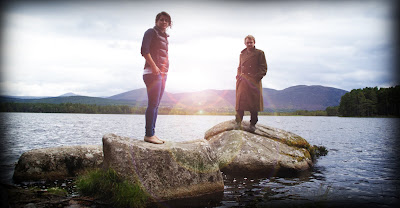 A little over a year ago I broke the story about a very interesting independent film being produced in Scotland called "Brocken Spectre." As many of you know monsters resembling Bigfoot or the Himalayan Yeti have been spotted all over the globe for centuries, what you may not know is that Scotland has such a monster legend often times referred to as "Fear Liath Mor" or "Big Grey Man of Ben MacDhui".

Yes, The Loch Ness Monster grabs all the press and limelight while the ape men of Ben MacDhui wander around in obscurity.

A group of young film makers at Carrbridge Films thought that the local legend would make the perfect subject for a film centering on possible rational explanations for the strange sightings.

Director Fergus Thom just shot me press release stating that filming on "Brocken Spectre" is now completed and a trailer is forthcoming:

Shooting has now “wrapped” for Brocken Spectre, a feature film being made in the Scottish Highlands by young filmmaker, Fergus Thom (19)

ʻBrocken Spectreʼ is based loosely on the legend of the Big Grey Man of Ben MacDhui and takes itsʼ name from the natural phenomenon most often used to explain sightings of the Big Grey Man – a brocken spectre being the magnified shadow of an observer cast upon the upper surfaces of clouds opposite the sun.

The film follows the story of Olivia, a young adult, as she leaves her city life behind in pursuit of a new start in the Highlands. Buying a remote bothy nestled in the mountains, she settles in with little drama. However, itʼs not long before the echoing footsteps on Ben MacDhui find their way to her.

Fergus Thom, the aspiring filmmaker behind the lens from Carrbridge, decided in 2010 that after leaving school, as well as starting his own business and continuing to run award winning news initiative ʻCarrbridge Newsʼ, he would make this feature film.
He said: “Itʼs been a lot of fun putting together this film, but also a lot of work. We started filming in late February, with the snow still on the ground, and finish now in Autumn as the Summer draws to a close!”

Continuing, he added: “There are so many amazing locations in the area that we really were spoilt for choice when it came to deciding where to film and it was always part of our ambition to try and capture the natural beauty of what weʼre lucky enough to have on our doorstep.”

Fergus roped in his friends to take on roles and play characters in the film and, reflecting on this, he said: “A great big thank you is very much due to the cast of the film, all of whom have shown such enthusiasm and been so tolerant of everything from the amount of time it takes to shoot each scene to putting up with filming in some really nasty weather conditions, they really have been great and their involvement has been hugely appreciated.”

Now entering post-production, a trailer is due to be released online very soon, and while no completion date has been announced, editing and production progress can be followed on the website www.brockenspectremovie.co.uk and on the filmsʼ Facebook page – search “Brocken Spectre”
By Ken Hulsey at October 02, 2011