THE LAST DINOSAUR - Did You Know? 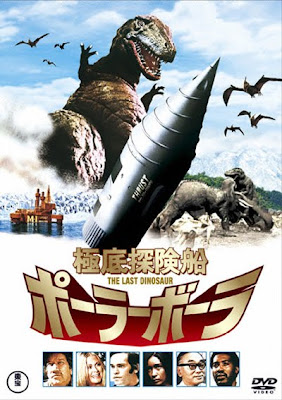 If your a child of the 70s, like I am, then you may or may not remember the rubber suited monstrosity known as "The Last Dinosaur." The movie was a Japanese/American co production about a billionaire big-game hunter who discovers an area under the polar ice where time has stood still since the age when dinosaurs ruled the Earth. Needless to say the hunter, Maston Thrust (Richard Boone), gathers a rag-tag team together to hunt for the ultimate trophy i.e. the last Tyrannosaurus in existence. As you could imagine old Rex doesn't want to end up a trophy and chases the puny humans around for an hour and a half.

That pretty much sums that up. Here is what you may not know:

This was originally scheduled for theatrical release in the United States. The release was cancelled and the film premiered, in edited form, as a TV-movie on U.S. network television. This edited version became the U.S. version used for television showings and video releases.

The Tyrannosaur was said to be twenty feet high, but when Joan Van Ark is seen running between its legs evasively, the dinosaur is clearly taller.

When Francesca and Hazel are at the river and are attacked by the tyrannosaurus, Francesca's hair is wet, but when she looks up at the dinosaur, her hair is considerably dryer.

The model of the polar-borer capsule has exhaust ports on the rear, but the full-sized version does not.

From the outside, the Bore is noticeably too small to hold five people - it's bigger on the inside shots than the outside.(In other words it's a TARDIS -K)

When hit in the head by a boulder, the tyrannosaurus' head visibly dents and then pops back into shape.

Watch closely during the pre-opening airplane sequence between Maston Thrust and his current girlfriend. During the exchange, Richard Boone clearly reaches both hands forward to grope the breasts of the actress and scores "Two Doubles" (reaching "second base" twice) right before the editor is forced to cut to another shot in hopes that he can get this scene past Standards and Practices. The audacity by Richard Boone is amazing given that this was intended to be a kids popcorn movie. (Hey ... she was hot okay - K)

The score was composed, as was most of the music for all Rankin/Bass specials and series, by Maury Laws, while the title song, with lyrics by Jules Bass, was sung by Nancy Wilson(a Grammy ward winning Jazz vocalist), and arranged and conducted by Bernard Hoffer.

Unlike other bigger budgeted movies that have used state of the art effects (i.e.: Stop Motion, puppets, etc.) for the dinosaurs, this movie uses the cheaper "man in a suit" method, much like the Godzilla movies of the 1960s and 1970s. The "ceratopsian" (Uintatherium), as well as the Triceratops were done through the "two guys in a horse-suit" technique. The scale (size) of the Tyrannosaurus also changes literally from scene to scene, in some cases it appears to be over 40–50 feet tall (when it attacks the borer) and can carry it in its mouth, when the Polar Borer is easily well over 10 feet in diameter. However, they do correctly state in the beginning of the movie that a Tyrannosaurus Rex is 20 feet high and 40 feet long.

The suit of Tyrannosaurus was created by Tsuburaya Production, and was converted from Ururu of Tokusatsu Anime Dinosaur War Aizenborg. Also while the film featured mostly an English speaking cast a Japanese dub was created for the television release in Japan. The Japanese theatrical release as well as the Japanese laser disc used the English voice cast with Japanese subtitles.