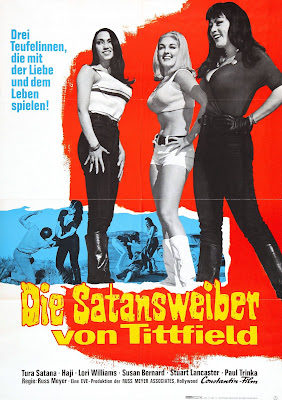 It is commonly known that what one person considers to be a great movie may not be so great to others. Many of us have guilty pleasures in the realm of cinema that make others scratch their heads and mutter "wtf"? Certain aspects of a film may speak to one person yet be totally lost on another. One man's treasure is another man's trash and so on.

Such a film is the 1965 Russ Meyer classic (?) "Faster, Pussycat! Kill! Kill!" which to me is one of those afore mentioned type of films. Why do I like it so much? Well ... I can only surmise that it has something to so with cleavage and violence. It may also have something to do with it being a great "quote movie" like "Army of Darkness", "Big Trouble in Little China" and "Shaun of the Dead".

"I never try anything. I just do it. And I don't beat clocks, just people! Wanna try me?"

Then again there is only one name that you need to know, Tura Satana. If you don't know who that is you sure will never be able to forget her after watching "Faster, Pussycat!".

The film was shot in the extreme western parts of the Mojave Desert. However, some of the scenes appear to have been filmed farther east, near Baker, California. The last scenes in the film were made west of California City. The rail line running between Mojave and Trona, California is clearly evident.

Lead actress Tura Satana, legally owns her likeness and image. So, whenever Russ Meyer wanted to change the artwork or re-release the project, he had to get her permission and sometimes pay her all over again.

Russ Meyer named the movie like this because he claims that a movie has everything when it contains speed (faster), sex (pussycat) and violence(kill,kill).

In the beginning of the movie, when Billie detours to go to the lake, the front driver's side wheel cover is missing, and looks like some minor front end damage in the same area, which can be seen when she pulls up and stops next to the bush at the lake. Later on in the film, the wheel cover is present and there is no damage to the car.

When Billie and Rosie are fighting in the dirt after being in the lake, Billie's hair appears much shorter than it does in other scenes.

During the dinner scene, Billie is eating a leg and thigh of chicken but when the shot changes to behind the old man she's eating a cob of corn.

After Varla cuts the fence and gets back into her car, look at the rear side window. Crew member with hat is briefly visible in the reflection.

Gas Station Attendant: [staring down at Varla's cleavage as he pumps gas] Just passing through, huh? Boy, that motor's sure hot! You gals really must have been moving on these little machines. Yessir, the thrill of the open road. New places, new people, new sights of interest. Now that's what I believe in, seeing America first!
Varla: You won't find it down there, Columbus!

And now you know!