"Professor, there's a big lizard back there and he's heading this way!" - The Valley of Gwangi Trivia 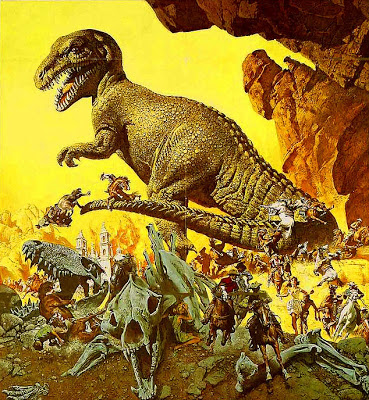 Gwangi is a native American word that means lizard.

When this film was first conceived it was supposed to have been a follow-up to King Kong, but was never made. However, version of the "cowboys in Africa" footage was shot, and wound up being used in Mighty Joe Young.

Due to a mishearing of the word "fuck" by the BBFC the 1995 video release was wrongly given a '12' certificate. This was corrected for the 2003 DVD and the rating changed to a 'U' certificate.

In 1971, Warner Brothers cleverly reissued this film in the USA on a double bill with When Dinosaurs Ruled the Earth. 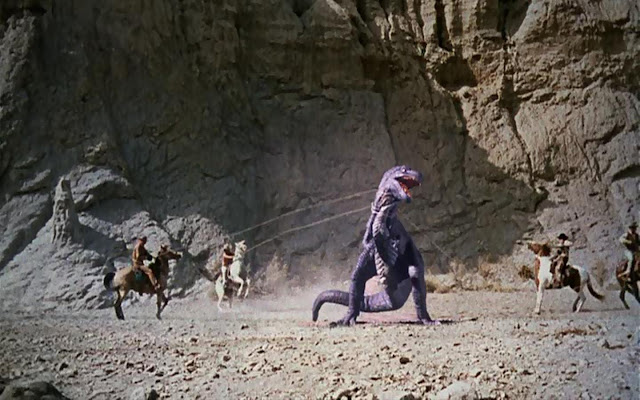 The roping of Gwangi was achieved by having the actors hold on to ropes tied to a "Monster stick" that was in the back of a Jeep. The jeep and stick when filmed with Gwangi are on a back rear projection plate and hidden by his body and the portions of rope attached to his body are painted wires that are matched with the real ropes.

Special effects master Ray Harryhausen has said that sequence of the elephant performing its act and its subsequent fight with Gwangi were done with no shots of a real elephant because no such animal was available. However, there is an elephant in the very early scene of the Wild West show's parade through the town, and Ray's animation puppet is a perfect double for it.

The pterodactyl picks Lope up by his shoulders but when T.J. is cleaning his wounds there are several claw marks down his right side and none on his shoulders. 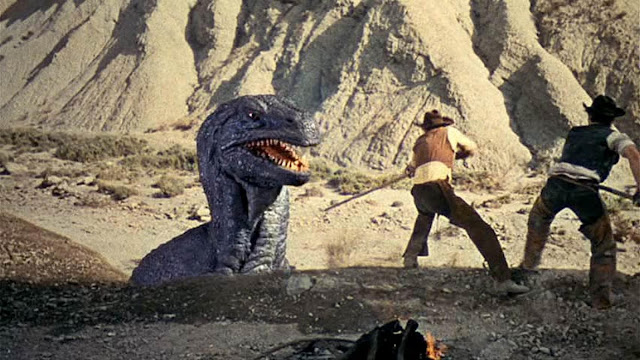 Early on, young Lope tells Tuck Kirby that the arena is two miles outside of the town. This is confirmed by Tuck encountering Professor Bromley's paleontological digs in open desert during his return from his first visit to it. However, at the film's climax the arena is clearly within the town.

When Gwangi is chasing the cowboys out of the valley through the rock pass, one person falls off his horse twice.

Gwangi's apparent color changes several times over the course of the movie because there was so much animation to do that Harryhausen did not have enough time to do proper color testing.