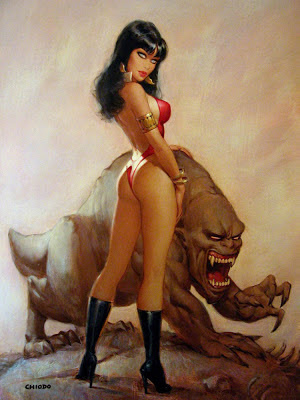 By popular demand, Dynamite Entertainment is proud to expand their beloved VAMPIRELLA line with a new five-part miniseries, entitled VAMPIRELLA: SOUTHERN GOTHIC. A tale of dark magic and mystery set against a Mississippi backdrop, the series features the writing talent of Nate Cosby and illustrations by Jose Luis. The first issue will hit store shelves in August 2013, available in two cover editions: an art edition by Johnny Desjardins, and Subscription-Only photo variant featuring model Kitana Baker.

In VAMPIRELLA: SOUTHERN GOTHIC #1, the industry's most iconic horror heroine may not be prepared -- even after a lifetime of fighting vampires, aliens, magicians, and monsters -- for the evil that lurks on the shores of the Mississippi. As the story begins, Vampirella confronts a demon whose blue blade leaves her with a glowing, mystical wound. Heading to the Deep South to recover, she is reunited with an old flame... and finds herself drawn into a murder mystery thick with old time religion and blood, blood, blood.

"The South's my wheelhouse. I'm from Mississippi, and figured I'd bring the vampire down to my home," says writer Nate Cosby, whose critically-acclaimed recent works, COW BOY and JIM HENSON'S THE STORYTELLER, have been nominated for Eisner and Harvey Awards, respectively. "The South is a strange, beautiful, frustrating place. It wears some of its history like a chip on its shoulder, and it tucks other parts of history away. It's a good setting for the noir-ish potboiler I wanted to write."

While the SOUTHERN GOTHIC series stands on its own, completely accessible to new readers, Cosby assures that the tale will fit faithfully into the overall VAMPIRELLA mythos, as pioneered by many of the industry's top talent. "There's a surprising amount of great writers that have told VAMPIRELLA stories in the past. In prepping for this series, I read tales by Kurt Busiek, Grant Morrison, Mark Millar, and many others. What I liked was that they were all different takes on this fun, dark, sometimes-campy character. She's got a malleability that allows creators to take her central vampire conceit and spin off into all different sorts of stories and storytelling. "

VAMPIRELLA: SOUTHERN GOTHIC #1 is solicited in the Diamond June Previews catalog for release in August. Johnny Desjardins, whose artwork on the current VAMPIRELLA STRIKES miniseries has gained him a dedicated following, will contribute the Main cover edition, while fan-favorite VAMPIRELLA model poses for the Subscription-Only photo variant, limited only to retailer initial orders as a reward for dedicated Dynamite fans.