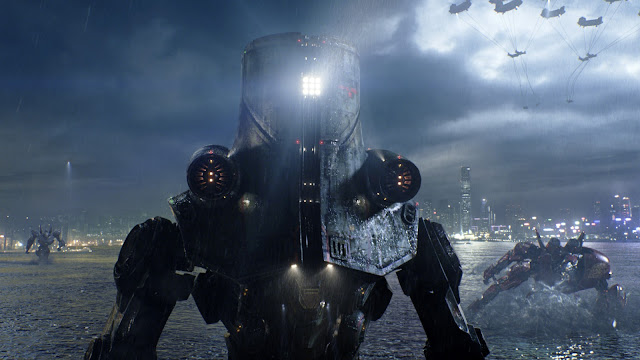 “In order to fight monsters, we created monsters of our own.”

Del Toro was largely responsible for shaping what are, literally speaking, the biggest stars of “Pacific Rim”: the Kaiju. “I love monsters,” states the director who conceived all the various monsters in the film in conjunction with an elite band of concept artists, illustrators, sculptors, and designers. “We had some of the best creature designers in the world involved in the making of the Kaiju.”

Members of the team brainstormed for weeks, beginning in a windowless room they appropriately dubbed “the submarine.” Together, they examined everything: from sizes, shapes and colors to how the immense beings moved and fought. Del Toro says, “We wanted to evoke the sheer awe and terror that one would feel when coming upon one of these monsters.”

He set down certain parameters: an example being that any animal kingdom inspirations were primarily limited to lizards, crustaceans and insects. For the most part, however, the think tank could let their imaginations run wild, taking a tag team approach as they pooled ideas. Recalling some of the process, del Toro describes, “Guy Davis would start a design and then Francisco took a stab at it. Then Simon Webber rendered it and Dave Meng would sculpt it. Seeing all those iterations of the creatures enabled us to make them all individual.”

The designers gave the Kaiju different nicknames that were indicative of their most prominent physical attributes, like Knifehead, Axehead, Leatherback, etc. Some are viciously calculated, others are more raw power. “They are living weapons,” del Toro says. “They are blind instinct combined with tactical intelligence, capable of making instant decisions in battle, so there are definitely a few surprises.”