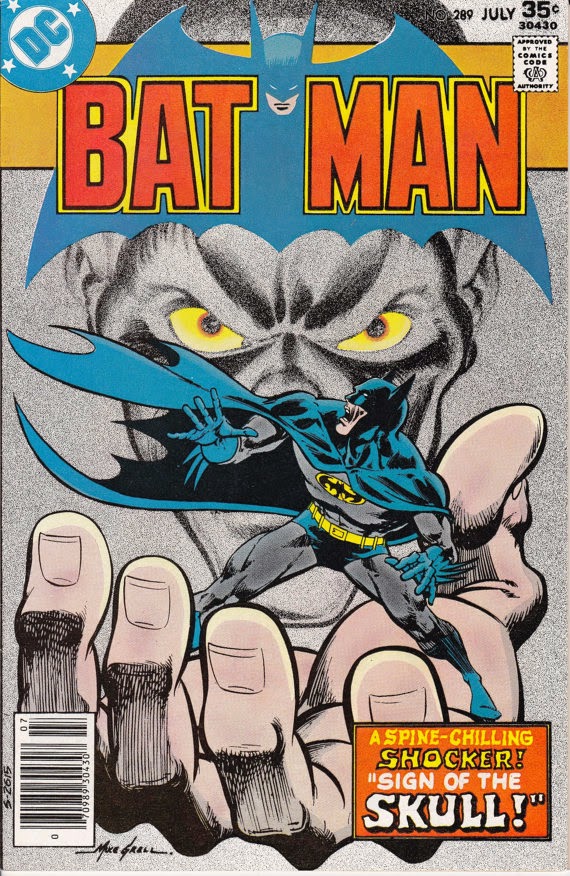 This comic book is in new condition. Comic is complete with cover and all pages attached. This comic has some flaws that warrant a VF/NM grade.

Cosmo "Skull" Dugger suffers from anhedonia, a psychologial condition that robs him of the ability to experience joy. He builds an electronic device that allows him to steal the joy--and life--of a person he points it at during their moment of greatest pleasure. The process leaves a skull imprinted on the forehead of the victim. After three victims are killed, Dr. Faye Sommers calls in Batman to examine the last one, and he winds up battling some of Dugger's thugs at the hospital, who are trying to steal the victim's body. Batman picks out "Skull" Dugger's face on videotapes of the events where each of the victims (a baseball player, an actor, and a lottery winner) were killed.

After discovering Dugger's name and residence, he drops in while Dugger is out and learns--quite painfully--Dugger's recent history from a mental recording device attached to a joy-making device. He then tries and fails to stop Dugger from committing a murder. Dugger returns to his lab, notices the recorder and joy-maker, and realizes that since Batman has used it in playback, all his instinctive responses to joy have become responses to pain, and vice versa. Soon, Batman appears at police headquarters, babbles incoherently, and then sits immobile in a chair, fearful to speak, act, or move at all. - DC Comics