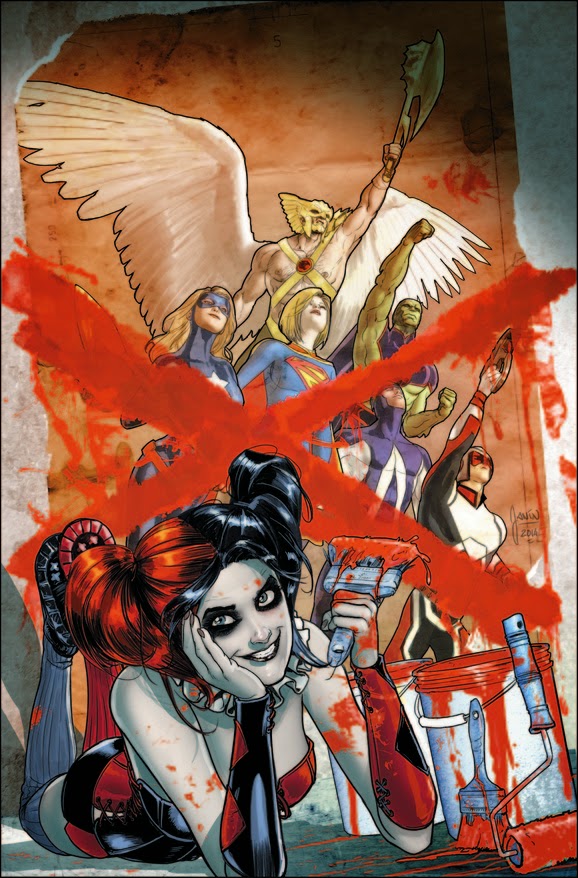 Ever since she broke the 4th wall (stop breaking things, Harley!) in HARLEY QUINN #0, Dr. Harleen Quinzel has done exactly what she wants. Whether she’s helping old geezers (“The Hunt for Red Octogenarians” in HARLEY QUINN #5), causing mayhem for Cos-Players (HARLEY QUINN INVADES SAN DIEGO COMIC-CON INTERNATIONAL #1), getting stranded with the Joker on a desert island (“Crappily Ever After” in HARLEY QUINN: FUTURES END #1) or just stinking up the place (“Scratch & Snuff” in HARLEY QUINN ANNUAL #1), Harley’s a force to be reckoned with.

And now she’s holding February hostage. HARLEY QUINN will be February’s variant cover theme month – and no hero (or villain!) is safe!

Take a look at the gallery above for AQUAMAN #39’s variant (illustrated by Amanda Conner and Paul Mounts) and JUSTICE LEAGUE UNITED #9’s variant (by Mikel Janin and CVDL), and head on over to COMIC VINE, IGN, NEWSARAMA and COMIC BOOK RESOURCES for their exclusive first looks at the rest!

See below for the full list of comic books that will feature these fun and collectible covers. The HARLEY QUINN variants are the latest in a variety of monthly themes. This month, November, features the release of LEGO® Batman™ 3: Beyond Gotham, December’s covers are all drawn by the legendary Darwyn Cooke, and January celebrates THE FLASH’S 75th Anniversary. Collect them all!