Sky Sharks - Sharks, Nazis, Zombies ... and Topless Amazons With Machine Guns All In One Movie 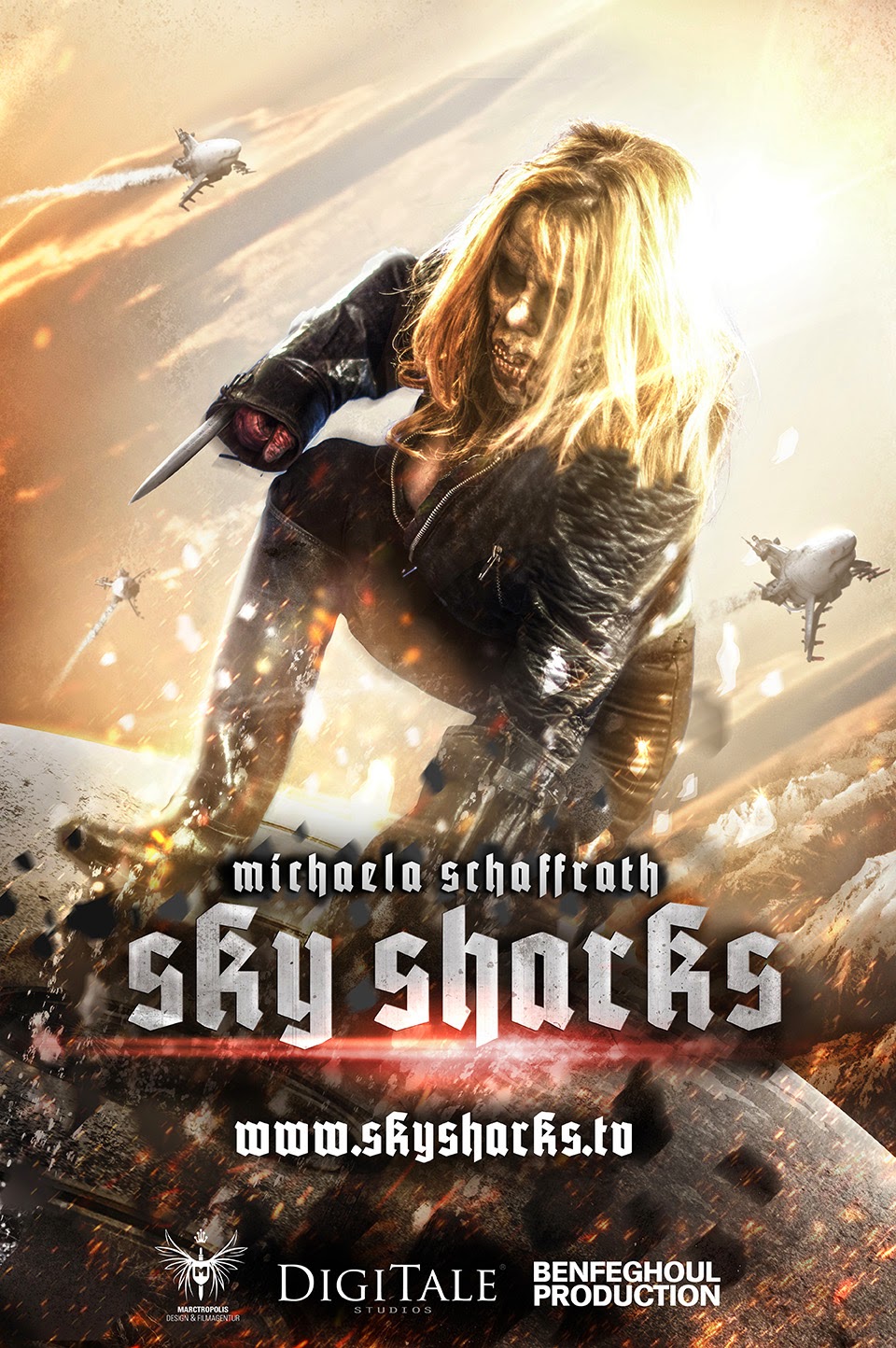 Leave it to those wacky Germans to create a movie with all the elements of Sharknado, Walking Dead, Snakes on a Plane, and The Exorcist all wrapped together with Nazis and topless amazon chicks thrown in to boot.

Now, I don't have any idea how all these things all go together (It's kinda like that game from Sesame Street back in the day ... One of these things is not like the other) but somehow the folks over at Benfeghoul Productions and Marctropolis Filmentertainment figured out how to mash it all up.

Details on this thing are kinda sketchy, due to the fact that most of the press is written in German (Go figure, right) but there is a portion of the films' website in English where we found this synopsis:

A team of Arctic geologists stumble across an abandoned laboratory in which the Nazis developed an incredible and brutal secret weapon during the final months of WW2 .

Deep in the ice, they accidentally awake a deadly army of flying zombie sharks ridden by genetically mutated, undead super-humans, who are unleashed into the skies, wreaking their bloodthirsty revenge on any aircraft that takes to the air.

An elite task force is assembled to take on this deadly threat and stop the Sky Sharks from conquering the air, but as time runs out, the task force realises they will have to fight fire with fire, and the stage is set for the greatest flying super-mutant zombie shark air battle the world has ever seen.... 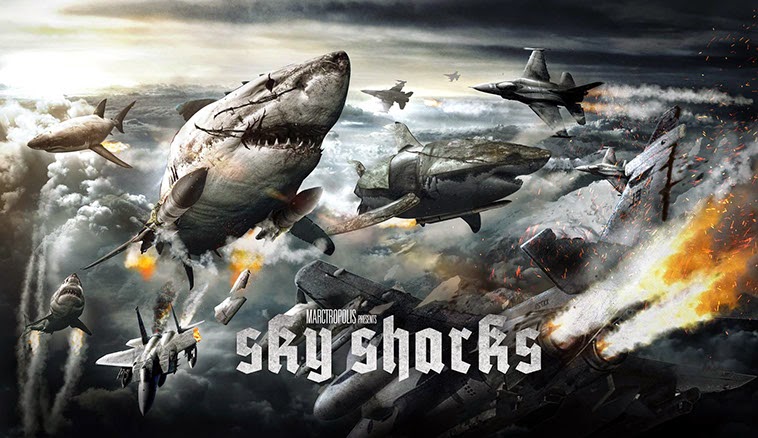 Honestly I can't wait to see that. Though that blurb promises a spectacular air war between jets and flying mutant sharks ridden by zombies (I know it takes a minute to wrap your brain around it) almost all the pics I've seen take place on a airliner with passengers and clergy fighting the undead. 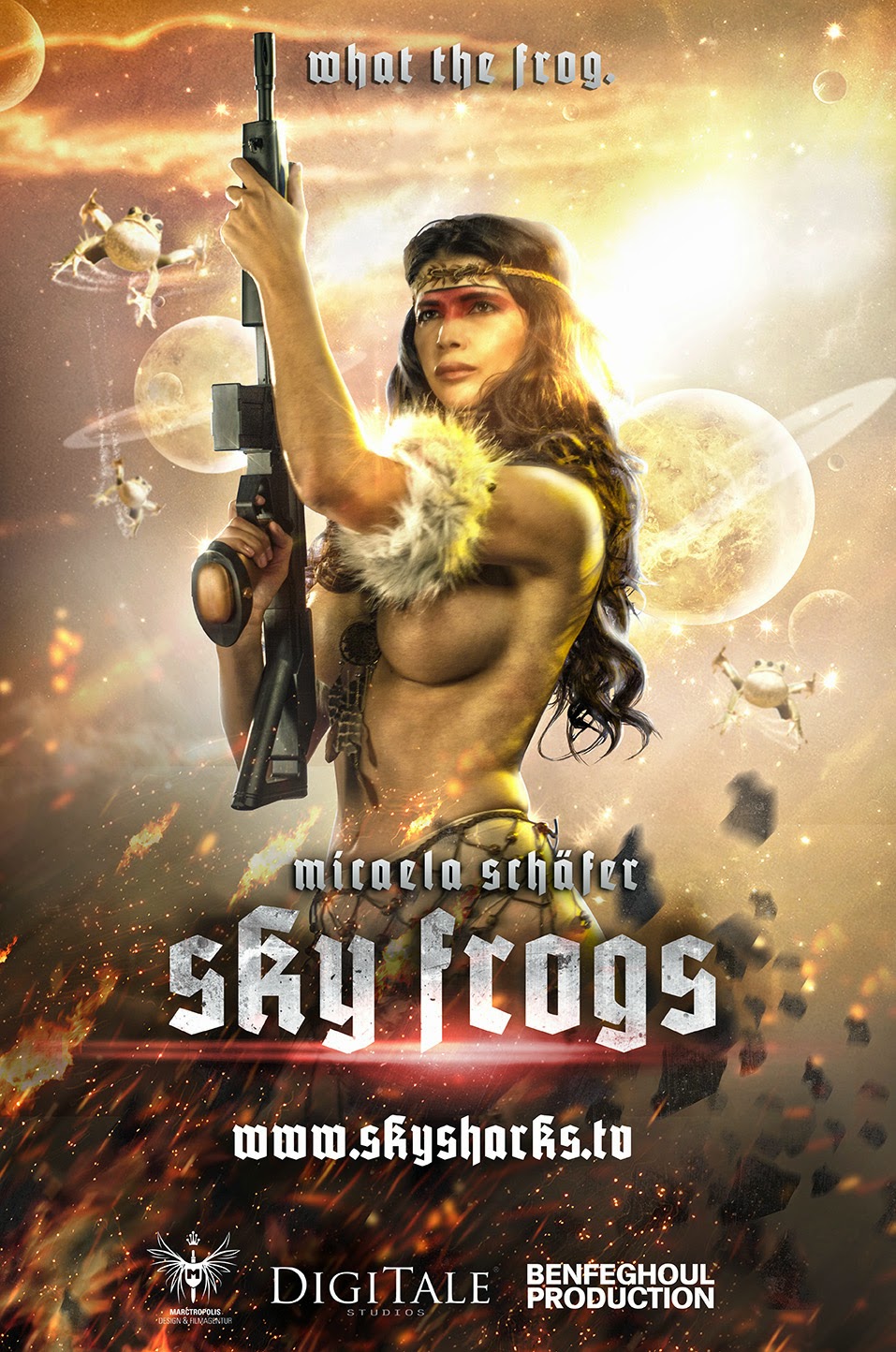 That leads me to this poster from the film that shows a topless amazon woman with a machine gun. The banner reads "Sky Frogs", which could be another movie or a parody of this movie? I have no idea!

All I know it is a buxom woman with a gun fighting of frogs. Maybe it's that wacky German humor or Benfeghoul Productions and Marctropolis Filmentertainment's next film project? When we find out we'll let ya know.
By Ken Hulsey - January 23, 2015