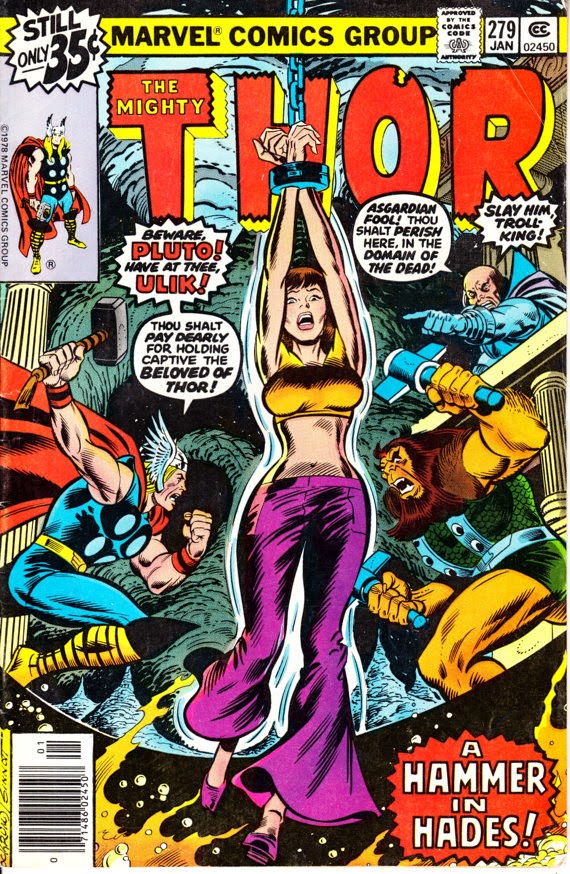 This comic book is in used condition. Comic is complete with cover and all pages attached. This comic has some flaws that warrant a VG grade.

Back on Earth, Thor thinks back to a time shortly after Jane failed to become a goddess. Both Jane Foster and Thor are strangely drawn to a spot out in the woods, where the ground opens up, and the demonic tentacles capture Jane, then the ground closes up again. Thor follows, only to find Jane a captive of Pluto. Pluto then reveals his ally in vengeance - Loki. Loki then summons Ulik to battle Thor. Thor and Ulik battle back and forth, until Ulik discovers that he is but the pawn of Pluto and Loki. Enraged, Ulik begins to attack Pluto. After saving Pluto from Ulik, and sending Ulik back to Asgard, Pluto releases Thor and Jane back to Earth, with Jane's memory erased of her ordeal and what happened earlier. - Marvel Comics
By Ken Hulsey at January 22, 2015