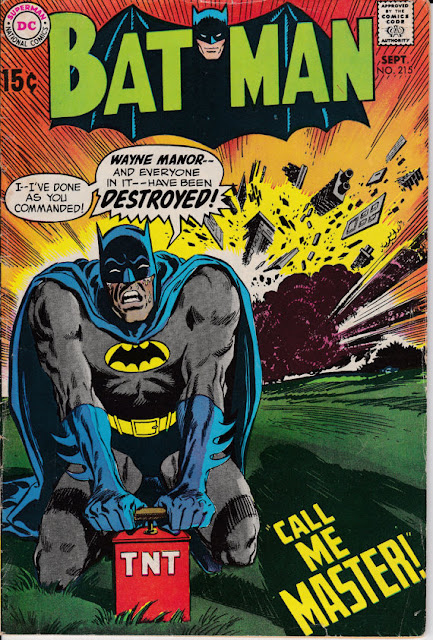 Batman and Robin try to stop three apparent robberies during the same night, only to find that each of the "victims" insists that a legitimate operation is going on, such as transferal of goods from a warehouse. However, all three "victims" are members of the Civic Conscience Council, as is Bruce Wayne. Bruce discovers that all the members of the Council, besides himself, have been hit by mysterious thefts, and the three "legitimate" operations last night prove to be illegitimate. Bruce soon receives orders himself from a mysterious phone caller, is compelled to open a Wayne Foundation drug storeroom to thieves, and, after Robin subdues the crooks, learns that even Robin can give him a command to hit him on the chin and he must obey it. Myron Mycroft, the mastermind and a member of the Council, soon learns that Batman is subject to his commands. He gives Batman a phone-command to blow up Wayne Manor as a test, and witnesses Batman push down a plunger-activator after a fierce internal struggle. But the "explosion" turns out to be a fireworks display rigged by Robin and Alfred. When Mycroft pulls a gun on Batman and snarls that he has placed a microwave willpower transmitter on him, Batman realizes the device is in the wristwatch he and other Council members were given at an honors dinner, removes it, and defeats Mycroft. Later, Mycroft admits he needed money to cover a stock loss in his company, and says that the watch-device emitted a vibrational frequency that numbed the "voluntary-control center of the brain, rendering it vulnerable to voice-commands!"
By Ken Hulsey at July 17, 2015