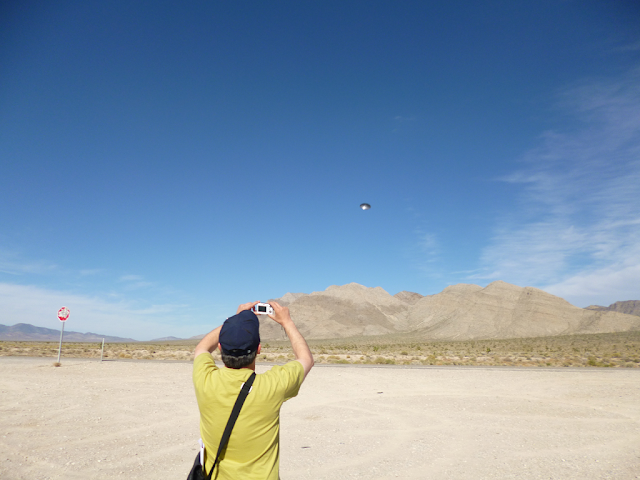 In the first week of July 1947 a UFO reportedly crashed on a remote ranch outside Roswell, New Mexico. The crash, the recovery of the UFO and it's three extraterrestrial crew members and the alleged government cover up that followed are now the subject of both folklore and an overwhelming number of stories that range from pure conjecture to alleged eyewitness accounts. What many people don't know is that in the weeks prior to the event a mass wave of UFO sightings occurred across the American southwest as a sort of precursor to what was about to transpire in the remote New Mexico desert. Now some seventy years later a mass of UFO sighting reports are once again happening in the same region of this country leading many experts to ponder if history is about to repeat itself? Is a first contact situation immanent?

For decades formations of mysterious lights appeared in the skies over Phoenix, Arizona and Lubbock, Texas, now similar formations are being seen over East Texas. Recently Harold Jackson of Longview noticed something strange in the sky as he was driving home:

"... I hit a stretch of highway where it was pitch black and I was thinking that I hoped that a dear or something wouldn't jump out in front of me, when something in the sky to my right caught my eye. Hovering in the sky very low maybe a hundred yards off was a triangular formation of lights, making no sound. I slowed down and blinked to double check my vision and they were still there. I kept my eyes on them as much as I could as I drove. About five minutes passed before I lost sight of them."

It seems that Texas is not the only spot where strange lights in the sky are appearing. In Albuquerque, New Mexico a strange "honey-combed collection of lights" was seen by several eye-witnesses. According to one of them:

"A strange bright light appeared directly over the city. When my mother, my best friend, his father, and myself first noticed the light we believed that it was a helicopter hovering over the center of town. Being the curious type, I ran to the garage and retrieved my father's army issue binoculars to get a better look. Upon viewing the object, I discovered that the 'light' was not a single illumination, but a honey-combed collection of lights. After about an hour or so the objects just simply vanished."

Nighttime sightings of UFOs are quite common but recently large silver cigar shaped objects have been seen in the daytime skies over Los Angeles and nearby cities. A truck driver in Riverside, California had this to say about an object he witnessed during his lunch break:

"At about 1:30 I took my normal position on top of the hill and began to eat my lunch. While I was sitting there I noticed a silver metallic object in the sky traveling from East to West.

As the object passed by, I noticed that it seemed to reflect the sunlight and I didn't notice any wings. I thought that this was an odd angle to view an airplane, which is what I assumed it was. I also noted that I hadn't ever seen a plane at this low altitude in this area of the sky before. Upon further investigation, I also noticed that this, 'plane', didn't seem to have a tail fin. It looked about the same size a commercial jet, oval, larger in the front tapering towards the tail.

As the object traveled to about 3/4 of the way across my point of view it simply vanished. Now when I say vanished, I mean it disappeared, slowly, like someone turned it off.

I sat in place for another ten minutes surveying the sky for the object and could not locate it anywhere in the heavens."

Several residents in Buckeye, Arizona recently reported seeing multiple sets of orange lights on the horizon. The lights, which were grouped in sets of two, three, and four, reportedly moved south, over the town, between interstates 8 and 10, towards the open desert. The lights would periodically blink on and off in a repeated order.

The eyewitnesses noted that during their observation, several Air Force jets attempted to follow the lights, but as they came close to them, they blinked out, making location impossible. After circling for a short period of time, to relocate the lights, the jets left the area.

Almost on cue, two minutes after the fighters had departed, the lights returned.

Reportedly two additional sets of lights appeared to the west of interstate 10. One set moved slowly towards the west in a straight line, while the other set moved in an up-and-down fashion.

A a group of students and parents were finishing an event at Dublin High School in Stephenville, Texas when they spotted a large oval object with very bright lights.

One of the students, Andy Monrreal, used his parent's video camera to film the unidentified craft for about a minute. The footage appeared on News 8 (WFAA) in Dallas/Fort Worth accompanied by statements from the Monrreal family. Andy described the UFO this way, "You could see a shape. It was like a complete circle." Likewise, his father stated, "I never seen nothing like that in my life… big lights and everything," and his mother added, "It was a round thing. You could see lights around it, flickering and changing. It was awesome. Just turning and flickering.”

In all, there were eleven witnesses to the aerial event over Stephenville that night, most of whom noted that soon after the mysterious aircraft appeared that military jets were also seen in the area. It is not known whether these jets were scrambled to intercept the UFO or they were on a training mission from a nearby Air Force base.

In January of this year it has been confirmed that fighter jets were indeed scrambled after several eyewitnesses spotted similar objects in the sky in the vicinity of the Bush Ranch in nearby Crawford, Texas.

In the decades since the alleged Roswell crash government sponsored programs like Project Sign, Project Grudge, and Project Blue Book were created in an attempt to convince the public that the UFO sightings were nothing more than simple misidentification of known celestial objects, namely the planet Venus and weather balloons from the Navy's Project Skyhook. The later was used rather frequently to explain such famous UFO events as Roswell and the death of Air Force pilot Thomas Mantell, who the government insisted was chasing a balloon, not a craft of unearthly origin, when his P-51 plummeted to the ground. Despite all the evidence that the military presented in an attempt to merely make the UFO phenomenon go away the accumulated data instead lead many military and civilian researchers to conclude that 'beings' unknown were monitoring atomic testing and bases throughout the American southwest.

Are there forces beyond our knowledge keeping track of us? Did our early atomic tests somehow get the attention of unearthly beings who now believe it necessary to "monitor" the human race so that we don't harm ourselves or any other species in the universe? Common sense would dictate that these questions wouldn't even be based in enough reality to warrant either an answer or more than a moments’ pondering. None the less reports of Unidentified Flying Objects have been a part of the human experience since ancient times. What are people actually seeing? Have we been visited by beings from other planets? Does the government really know the truth? Is it all just a cornucopia of hoaxes, lies, misidentifications and the ramblings of knuckleheads looking for their pictures in the newspaper and five minutes of fame? The evidence would truthfully point to something real happening, though the whole truth of the matter will probably never be revealed ... at least not to the general public. Not unless a UFO lands on the fifty-yard-line during the Super bowl anyway.

It seems like an eerie coincidence that the events of 1947 seem to be repeating themselves. Maybe the latest flurry of UFO sightings is leading up to something significant?
By Ken Hulsey at June 25, 2017