With this year's Superman Celebration coming up on June 7 -10 in Metropolis, Illinois, it would be a good idea to show what the town's Super Museum has to offer you. I visited Metropolis in November 2016 to attend the memorial service for actress Noel Neill.

Along with the Super Museum, the town also has a statue honoring Noel, which I also visited.

Following my visit to the Noel Neill Lois Lane statue, I headed to Harrah's Casino alongside the Ohio River for breakfast. After breakfast, I went to the square next to the Massac County Court House where the giant Superman statue and Super Museum are located.


Upon arrival, I found that the Superman statue was wearing a Santa Claus hat. There were already Christmas decorations on the fence surrounding it. A couple were viewing the statue and photographing it. They asked me to take some of them with the statue, so I obliged. I had them take some of me with it as well.


Once we were done picture-taking, I headed off to the Super Museum. Inside, is a large store filled with all kinds of Superman and super-hero goods. I bought a magnet for The Beast. While roaming around the store, I ran into Noel's biographer, Larry Thomas Ward. I didn't recognize him right off as he had his hair cut much shorter than the last time I saw him two years ago.


We exchanged greetings and he marveled that I drove all the way from L.A. to Metropolis. I then paid my admission fee (just $5.00) to enter the museum. Before going in, I asked the lady at the counter if it is okay to photograph inside. It turned out that she's the daughter of the museum's owner/operator Jim Hambrick. She said that I can take all the pictures I wanted. (I always ask permission to take photos whenever I go into a museum. Some allow it and some don't.)

"Relics" From the Adventures of Superman TV Show: 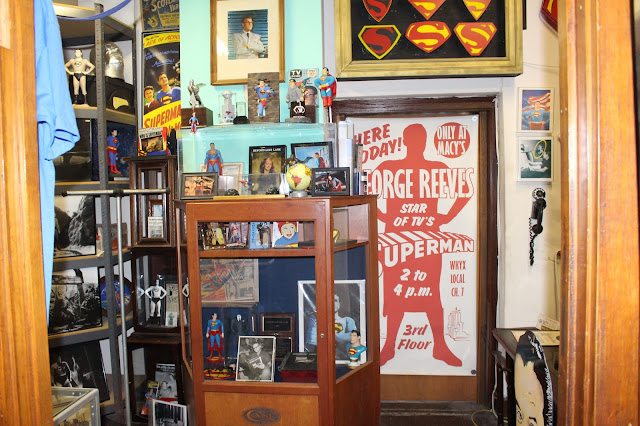 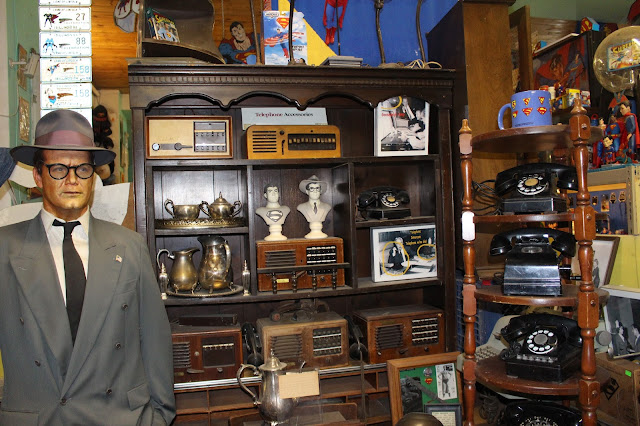 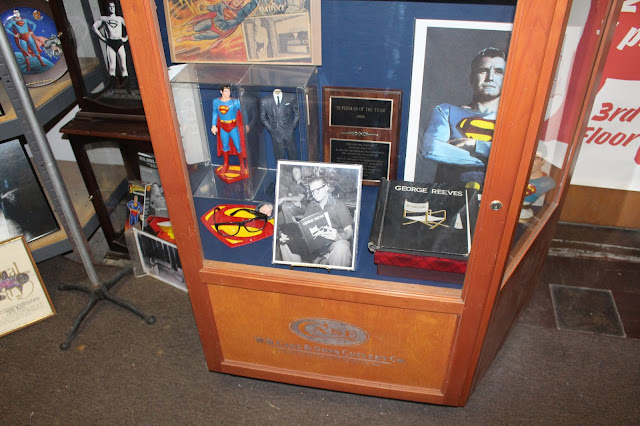 Upon entering the museum, I first saw a big display case of assorted Superman toys. I made a right turn and immediately came upon the Adventures of Superman television show section. It contained many photographs and props from the show. I took some photos of the displays. I then headed down to the next section, which was (more or less) dedicated to the first screen Superman, Kirk Alyn.


Following this, I headed further where I found props and memorabilia from the Christopher Reeve Superman movies, including one of his costumes.


Next, was a section dedicated to the Broadway Superman show of the 1960s. Ahead was a new separate room of Superman items which was dominated by a huge figure of Doomsday, the "critter" that killed Superman in the comic books in 1992.


Then, I reached a room dedicated to Supergirl. All incarnations of the Supergirl character were in this room, but mainly the Helen Slater Supergirl movie. If there were anything pertaining to the current Supergirl television series in there, I certainly didn't see any. (Keep in mind that this was in 2016. They may have artifacts of the Melissa Benoist Supergirl show now.)


Further on, was another section of photographs and memorabilia from the George Reeves Adventures of Superman television show including a "flying pan" from 1951-53, a "lead" mask from the 1953 episode, "The Man In The Lead Mask", a color George Reeves Superman costume and the "Mr. Kryptonite" costume worn by Gene LeBell in 1957 during a county fair tour.

Also in this section were some original art by Curt Swan, Dick Giodano and others. There were more Superman memorabilia from over the years in this section, mainly toys and figures.


After this, I exited the museum and re-entered the store.

The museum is a must-see for Superman fans of all ages.  It is worth a visit!


I took many more photos inside the Super Museum. I will probably post them in a separate blog post in the near-future. For the museum's website, go here.

As I mentioned at the beginning, I visited the Noel Neill Lois Lane statue before touring the Super Museum.

Here's a photograph of it: