UFOs: How Aliens Should Stop Worrying and Love the Bomb 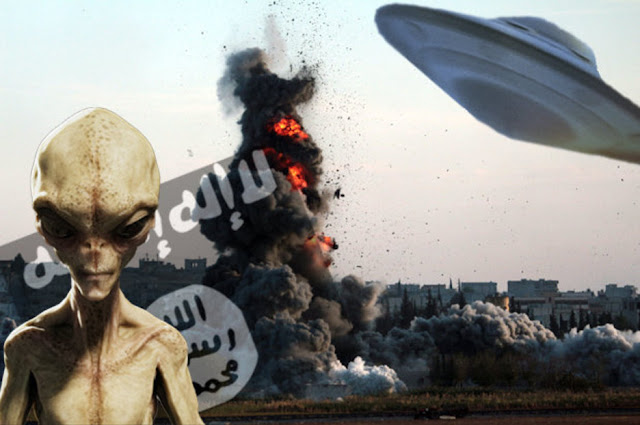 Well it looks like a senario from the sci-fi classic "The Day The Earth Stood Still" may come to pass yet. According to new documentary aliens from other worlds don't care much for nuclear weapons and our potential use of them on ourselves ... or possibly them.

I refer to Klaatu:

"... you will forgive me if I speak bluntly. The universe grows smaller every day, and the threat of aggression by any group, anywhere, can no longer be tolerated. There must be security for all, or no one is secure. Now, this does not mean giving up any freedom, except the freedom to act irresponsibly. Your ancestors knew this when they made laws to govern themselves and hired policemen to enforce them. We, of the other planets, have long accepted this principle. We have an organization for the mutual protection of all planets and for the complete elimination of aggression. The test of any such higher authority is, of course, the police force that supports it. For our policemen, we created a race of robots. Their function is to patrol the planets in spaceships like this one and preserve the peace. In matters of aggression, we have given them absolute power over us. This power cannot be revoked. At the first sign of violence, they act automatically against the aggressor. The penalty for provoking their action is too terrible to risk. The result is, we live in peace, without arms or armies, secure in the knowledge that we are free from aggression and war. Free to pursue more... profitable enterprises. Now, we do not pretend to have achieved perfection, but we do have a system, and it works. I came here to give you these facts. It is no concern of ours how you run your own planet, but if you threaten to extend your violence, this Earth of yours will be reduced to a burned-out cinder. Your choice is simple: join us and live in peace, or pursue your present course and face obliteration. We shall be waiting for your answer. The decision rests with you."

"Visitors from outer space obviously do not like nuclear stuff in the hands of humans. Otherwise, why focus on shutting down nuclear sites? Any force powerful enough to shut down nuclear weapon silos is so far beyond the capabilities of earthlings that they can dictate whatever they want. Still, why shut down missile sites? If “intention” is exposed by activity, then their message says nuclear power plants and nuclear weapons should go the way of the dodo bird."

"There are many, many documentaries about UFOs but mostly ill conceived, unsubstantiated and horribly contrived. UAMN’s may be one of the only films that seems credible (hopefully, maybe) because of the quality of first-hand witness accounts and use of declassified military documents.

“UFOs and Nukes: The Secret Link Revealed” is a Robert Hastings film. He was born in Albuquerque, NM in 1950 at a military base where atomic weapons were engineered. His father served in the USAF. From 1966-67, the family stationed at Malmstrom AFB, Montana. During one particular incident of UFO activity over a Minuteman missile site, Hastings personally witnessed five UFOs tracked on radar at base air control. That experience led to a lifetime of research. The film’s message comes thru very clearly. Humans should not be messing around with nuclear power. Didn’t Einstein also say that?