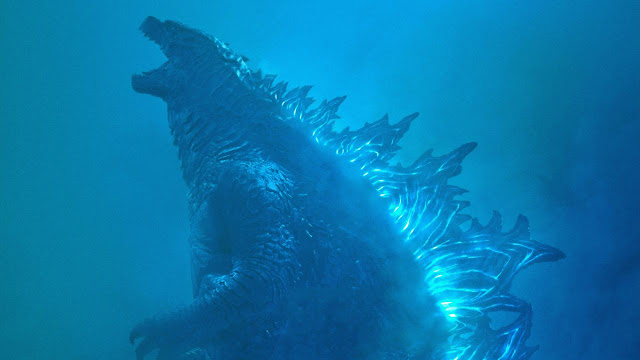 Godzilla has been keeping a low profile in the MonsterVerse over the last several years, but this summer, the beast is finally making his grand return and will prove he reigns supreme over the other Titans in Godzilla: King of the Monsters. Krampus' Michael Dougerty directed and co-wrote the sequel, and one of the ways he left his own stamp on Godzilla was by having the spikes on his back look like the ones from the monster's first cinematic appearance back in 1954. Dougherty explained:

"With Godzilla, I really liked what [director Gareth Edwards] had done in the previous film with Godzilla's look, so I just wanted to make tiny tweaks, like changing his back spikes to look like the 1954 Godzilla. These, in particular, were taken right off the back of the original 1954 Godzilla. So I took Photoshop, and just photoshopped these spikes onto the back of Gareth's film."

When you have a franchise that's been around for as long as Godzilla's, it's nice if there are opportunities to honor/pay homage to the earlier entries, even if they don't exist in the same current continuity. For Michael Dougherty, that was doing something as simple as making those back spikes look closer to their original design. It's hard to say how many average moviegoers would notice that the spikes from Godzilla's return to American cinema in 2014 don't perfectly match the ones he has in Godzilla: King of the Monsters, but the fact that Dougherty even thought to make these tweaks shows just how much of a fan of the Godzilla franchise he is, specifically the first movie, as he mentioned earlier in his interview with Tamashii JP (via GORMARU).

The redesigned spikes also aren't the only reference to the original Godzilla movie inserted into Godzilla: King of the Monsters. Back in August 2017, in the middle of principal photography, Michael Dougherty posted a photo of the Oxygen Destroyer, the weapon of mass destruction that was used against the gigantic reptile in 1954. It remains to be seen if King of the Monsters will show its own Oxygen Destroyer being activated, but the fact that Dougherty took the time to photograph this prop suggests we will at least glimpse it.