Sarge starts winning at dice and feels that is a bad portent for the Losers. Their C.O. demands that they draw straws, and when the Losers draw the short straw, they think that they're in for it now. However, it turns out that the short straw wins a leave to London. The Losers arrive in the aftermath of a bombing and rescue some kids at the bequest of their mother near an unexploded bomb. They attempt to save the woman, but they are not in time before the bomb detonates. The Losers head back to camp as they feel even when they get leave it turns out to be a losing proposition. 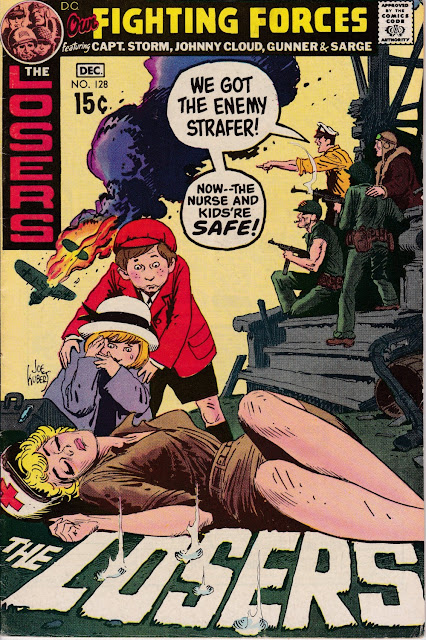 1st printing.
This comic book is in used condition. Comic is complete with cover and all pages attached. This comic has a few flaws that warrant Fine grade.
Comic Book will be shipped bagged and boarded!

Our Fighting Forces began with an October–November 1954 cover date. Writer-editor Robert Kanigher's work appeared in most issues of the title. Artist Alex Toth worked with writer/editor Archie Goodwin on the story "Burma Sky" in Our Fighting Forces #146 (Dec. 1973–Jan. 1974) and Goodwin praised Toth's art in a 1998 interview, stating "To me, having Alex Toth do any kind of airplane story, it's a joy for me. If I see a chance to do something like that, I will. He did a really fabulous job on it." Jack Kirby wrote and drew issues #151 to 162 featuring The Losers. Other contributors include artists Jack Abel, Ross Andru, Ken Barr, Gene Colan, Ed Davis, Mort Drucker, Mike Esposito, Ric Estrada, George Evans, Jerry Grandenetti, Russ Heath, Bruce Jones, Joe Kubert, Irv Novick, John Severin, Tom Sutton, Frank Thorne, and Wally Wood, some of whom would also script. The series was cancelled as part of the DC Implosion with issue #181 (September–October 1978).
By Ken Hulsey at May 27, 2019