Superman "Tales of the Bizarro World!" 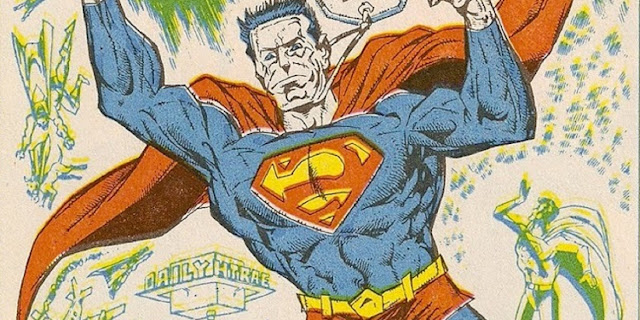 Bizarro-Jr. No. 1 gets in trouble at school for giving the correct answers on exam questions, but sleep-carves a Mount Rushmore-style monument to famous movie monsters of Earth, flunks his art test with highest honors, and redeems the pride of the first Bizarro family. 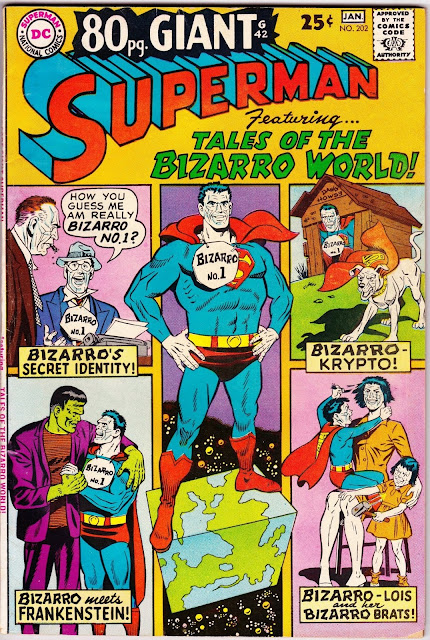 1st printing.
This comic book is in used condition. Comic is complete with cover and all pages attached. This comic has flaws that warrant a Fine grade.
Comic Book will be shipped bagged and boarded!

"Bizarro's Amazing Buddies"
This story is reprinted from Adventure Comics #289.

When parents on the Bizarro World rise up in protest against horrifying TV programs from Earth like Daniel Boone, Bizarro No. 1 goes to Earth to find some wholesome heroes worthy of being seen on children's programming, like the Abominable Snowman, the Frankenstein Monster, and the Devil. He locates none of them, but does run across Titano, the giant super-ape, whom he calls "Tiny" and promises to make a star. On the Bizarro World, kids declare that "Tiny" is a steal of King Kong. Bizarro is disgraced. And because he is, the Bizarro Mayor proclaims him a hero and features him and his family in a ticker-tape parade.

"Bizarro's Secret Identity"
This story is reprinted from Adventure Comics #288.

Bizarro Mxyzptlk gives Bizarro Lois No. 1 super-powers, and she assumes the secret identity of Stupor-Woman to help female Bizarros. Mister Mxyzptlk comes by, makes everyone forget Bizarro-Lois was Stupor-Woman and takes away her powers, while making Bizarro No. 1 put on a fake nose and become Stupor-Man, using a secret identity of Bizarro-Clark Kent. Perry White exposes Bizarro-Clark as both Bizarro No. 1 and Stupor-Man because he wears his "Bizarro No. 1" medallion in plain sight. Bizarro abandons his disguise, but says he must be smarter than Superman, because his secret identity was exposed on his first case.

"Bizarro Meets Frankenstein"
This story is reprinted from Superman #143.

On Bizarro World, the Bizarro family is enjoying an evening of watching Earth television programs. They come to enjoy the horror movies, as to the Bizarro mentality, they equate to comedy, when Bizarro tells his children that he is the greatest monster of all, he is quickly corrected when an advertisement for a movie based on Frankenstein's Monster airs on the television. This prompts Bizarro to return to Earth and face off with the Frankenstein Monster.

Of course the monster is fictional, and so Bizarro ends up attacking an actor who is portraying the role, bringing the attention of Superman. Since Bizarro hasn't done anything wrong, Superman chooses to just sit back and see what the monster ends up doing. Bizarro then begins to try and scare people, but only finds that people laugh in his face and don't find him the least bit frightening. Not even a pair of children are scared of Bizarro, and instead come to enjoy his company.

This drives Bizarro mad with rage and he goes on a rampage on the movie set, until he believes he's scared everyone because their hair is standing on end. In reality, Superman had turned on a static electricity generator, so that Bizarro would be satisfied and go back to his home world.

Watching with his x-ray vision, Superman sees just that, and Bizarro goes to his children and presents them with a marionette of the most frightening thing he could find on Earth: Superman.

"The Bizarro Invasion of Earth"
This story is reprinted from Superman #169.

Superman is dismayed when the Bizarros come to Earth saying that they will do him the favor of destroying the planet, not knowing they mean the advertising globe on top of the Daily Planet building.

"The Bizarro Perfect Crimes"
This story is reprinted from Adventure Comics #291.

When criminal Bizarros kidnap Bizarro Lois Lane and hold her hostage, Bizarro No. 1 is forced to think up get-rich-quick schemes for them time and again, such as raiding Earth garbage dumps and wrecking cars to make them more valuable, until Superman impersonates him, lends a hand, and gets the wicked Bizarros to reveal where they have stashed Bizarro's wife.

"Bizarro Creates a Monster"
This story is reprinted from Adventure Comics #292.

Bizarro is angered that broadcasts he picks up from Earth call the Frankenstein Monster a horror character, so he decides once again to give his people a real monster. First he captures an apelike caveman from another planet. Then he trains the duplicator ray on the caveman, and produces a blond Adonis whom foolish Earth people would call a matinee idol, but whose looks are enough to drive Bizarros into paroxysms of fright. The creature, whom Bizarro names Sapollo, does star in a film, but it proves to be too much for even the toughest Bizarros. Bizarro No. 1 eventually bows to the will of the planetary council, and agrees that Sapollo is too horrible to live. But before he can be captured, Bizarro Mxyzptlk merges Sapollo with the body of the caveman. Because the caveman is a decent-looking sort who goes around smashing houses, including that of Bizarro No. 1, everybody is satisfied, and all breathe a sigh of relief, knowing the monster has been banished.

NOTE: Images below are not from the issue for sale. They are generic images for reference only. 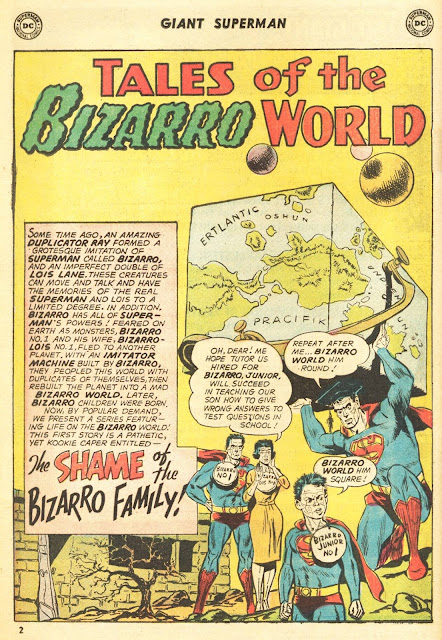 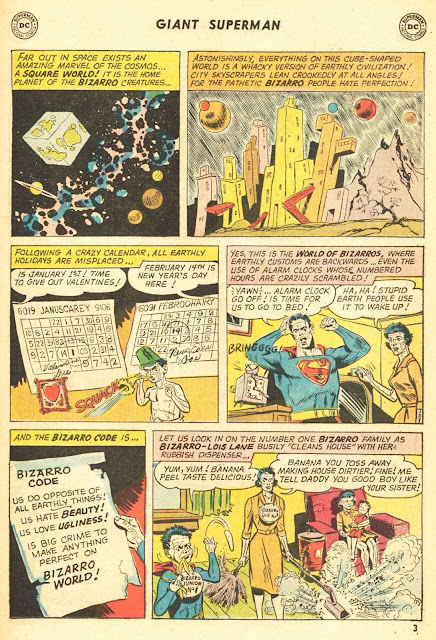 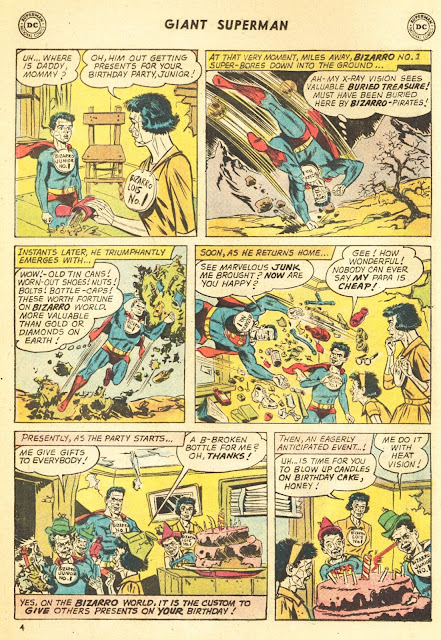 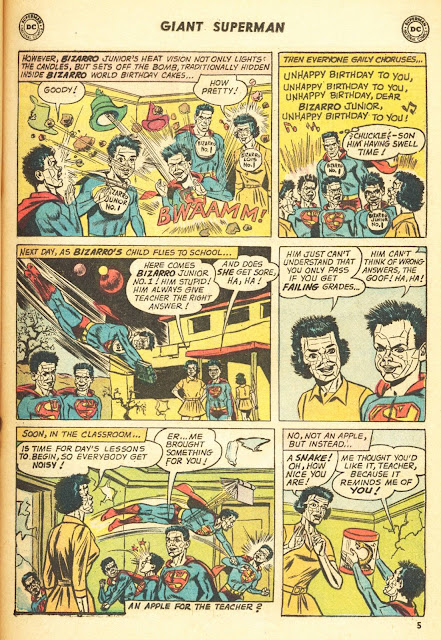