The Four Faces Of Doctor Who

The Fourth Doctor is an incarnation of the Doctor, the protagonist of the BBC science fiction television series Doctor Who. He was portrayed by Tom Baker.

Within the series' narrative, the Doctor is a centuries-old Time Lord from the planet Gallifrey who travels in time and space in his TARDIS, frequently with companions. At the end of life, the Doctor can regenerate his body; as a result, his physical appearance and personality change. Baker portrays the fourth such incarnation, a whimsical and sometimes brooding individual whose enormous personal warmth is at times tempered by his capacity for righteous anger.

Baker portrayed the character for seven consecutive seasons, which remains the longest tenure of any actor to portray the lead, counting both the classic and modern series. He is considered to be the most recognizable and iconic incarnation of the Doctor both in the United Kingdom and internationally. 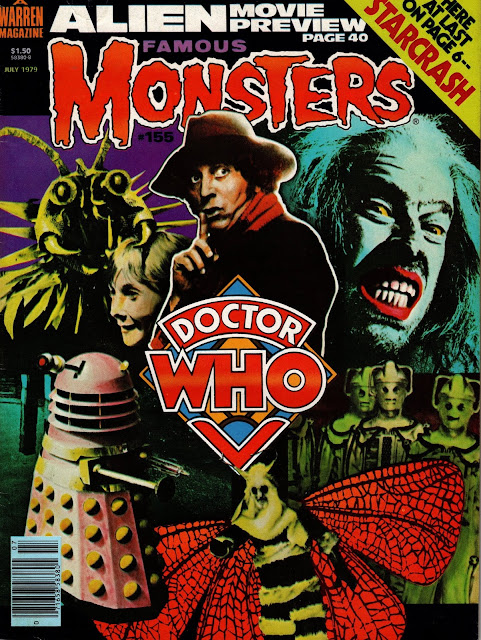 What Makes This Issue Cool

The Cat Creeps ... Again
A look back at the 1922 horror The Cat and the Canary plus remakes and films it inspired.

The Four Faces Of Doctor Who
The Fourth Doctor (Tom Baker) gets profiled in an wonderful article that traces the history of the famed BBC series back to it's roots.

Doctor Who vs The Big Wide Movie Screen
A look back at the two Dalek movies (Doctor Who and The Daleks / Daleks Invasion Earth 2150 A.D.) starring Peter Cushing.

The Secret Of The Asteroid Is ... Alien
An in depth article about the sci-fi / horror classic Alien.

Those Blood Curdling Beepix
Sometimes film makers didn't have a lot of money so they had to make due with sub par monsters, actors and scripts. Yet we still remember their work even today!

More rare photos from the Forry Ackerman collection in this one!