Would You Believe That Pamela Anderson Was Almost Cast As Dana Scully? 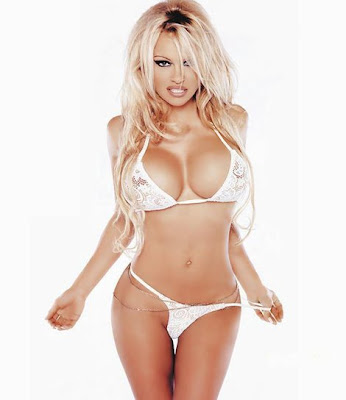 Sci Fi fans have come to relish Gillian Anderson's portrayal of Dana Scully in the "X-Files" movies and TV series, but originally Fox executives had someone else in mind for the role. It appears that way back in the early 90s the producers of the show had envisioned Scully as a character with more boobs than brains.

During a recent PR event for this weekend's theatrical release of "The X-Files: I Want To Believe", Gillian Anderson revealed that originally Fox had wanted former Playboy Playmate and "Baywatch" star Pamela Anderson to play the ever-so logical counterpart to Fox Mulder.

Anderson explains, "That was somebody (Pamela Anderson) who was more familiar to them in terms of what was on TV at the time.

"They were looking for someone bustier, taller, leggier than me. They couldn't fathom how David and me could equal success... At the beginning, nobody trusted that I could do anything. I had no body of work behind me at all, and, certainly Fox felt very strongly that I wasn't the right person for the job."

In other words, Fox was looking for a sexy woman for the largely male sci fi fan-base to drool over. It would be safe to say that the narrow minded suites must have felt that the only way to have ensured that the series would become a hit was to cast an ex-Playmate in their series. Little would they know that the "X-Files" would become an instant hit, even without a woman with a rack in the cast, and that Gillian Anderson would be voted as one of the sexiest women in the world.

Just goes to prove that a smart woman can be even sexier than a blond with huge juggs.
By Ken Hulsey at July 24, 2008