When It Comes To The Presidential Election The Only Celebrity You Should Listen To Is Chuck Norris!! 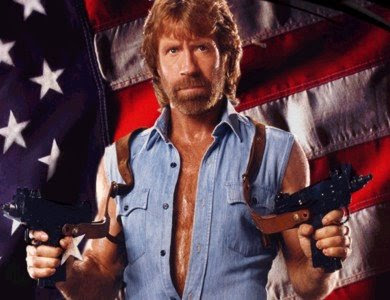 As the presidential race heads into the "home stretch" more and more celebrity knuckle-heads seem to be flocking to the side of Barack Obama like moths to a flame. Yet, it seems one famous person has had the balls to stand up for Republican candidate John McCain. Who could be so brave? Who could stand up for right, when so many are against him? Who could have the stones to stand up for his beliefs and the preservation of the American way of life? Chuck Norris, that's who!

Norris recently told an interviewer, "My choice would be John McCain and Sarah Palin mainly because, with Sarah, I think she'd make a good president because she's a no-nonsense gal and she has much more experience than Barack Obama.

Meanwhile, Walker, Texas Ranger star Norris urges those keen to vote for Obama to look beyond the politician's charisma.

He tells U.S. TV show Extra, "I like his personality and he's a very charismatic guy. I think he has the country at heart, but I think he's misdirected... and because of his misdirection, he's going to lead us down a very deep hole if he gets elected."

But, despite his interest in politics, Norris insists you'll never find his name on a ballot: "I would never run for office. I had tough skin as an entertainer. I don't think my skin is tough enough as a politician."
Finally! A celebrity that isn't talking out of their ass!
Of course it would stand to reason that most celebrities would back a Democratic candidate, only someone who makes as much money as they do can afford the higher taxes needed to fund all the parties "feel-good" programs.
By Ken Hulsey at September 26, 2008