Doctor Who - The Next Doctor 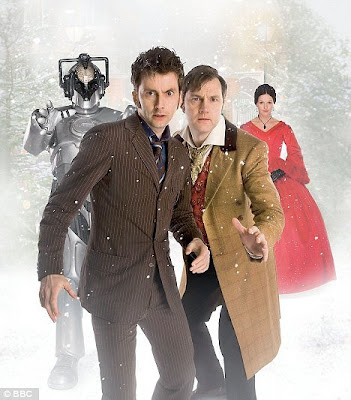 It's Christmas Eve in 1851 and Cybermen stalk the snow of Victorian London, in this special Christmas edition of Russell T Davies's Bafta Award-winning time-travelling drama. 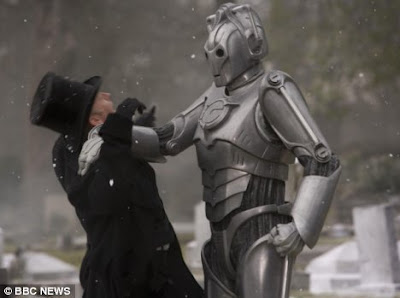 When the Doctor arrives and starts to investigate a spate of mysterious deaths, he's surprised to meet another Doctor, and soon the two must combine forces to defeat the ruthless Miss Hartigan. But are two Doctors enough to stop the rise of the CyberKing?

The Doctor (Tennant), "But you're the Doctor! The next Doctor! Or the next-but-one, a future Doctor anyway. No don't tell me how it happened! Although I hope you didn't just trip over a brick, that would be embarrassing. Then again, painless. Worse ways to go. Depends on the brick." 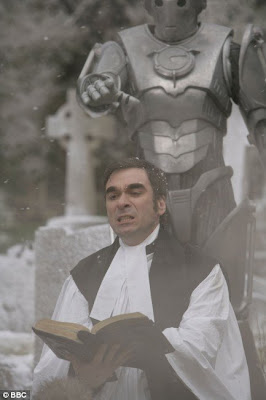 David Tennant stars as The Doctor, David Morrissey as The Doctor and Dervla Kirwan as Miss Hartigan. This episode also features Velile Tshabalala as Rosita.
Velile Tshabalala revealed some very interesting facts about her character in a recent interview, "Apparently Rosita was 'a lady of the night,' and one night she was out earning her living and a Cyberman came to attack her. The other Doctor came to rescue her and it went from there. He wasn't a client, he came and saved her!"

The episode also stars all nine previous Doctors, William Hartnell, Patrick Troughton, Jon Pertwee, Tom Baker,Peter Davison, Colin Baker, Sylvester McCoy, Paul McGann and Christopher Eccleston. - Look sharpe, or you may miss them!
See Also: Robert Carlyle Has A Date With A Stargate Not A Tardis / Robert Pattinson Has Possessed All The Teen Girls And Now He Wants To Be The Doctor / Freema Agyeman Talks About Doctor Who, Torchwood And Her Latest Series Survivors / 400 Fans Go Behind The Scenes Of Doctor Who And Torchwood / Beautiful New Artwork For A Proposed Doctor Who Comic Series / David Tennant Not Ruling Out Any Future Who Appearances / David Tennant Officially Announces That He Is Leaving Doctor Who / Actor Profile - David Tennant / A Special Preview Of The Doctor Who Christmas Special For Children In Need / Prince Charles Snubbed The Doctor / Fans Are Given A Rare Chance To Visit The Sets Of Doctor Who, Torchwood, And Sarah Jane / Russell T Davies Chimes In On Who Should Be Doctor Who / Billie Piper Still Undecided About Return To Doctor Who /Torchwood: Children Of Earth Begins Filming / Doctor Who - Turn Left / The Odds Of James Nesbitt Being The Next Doctor...Don't Put Your Money On It! /Is Robert Carlyle Going To Be The Next Doctor? / Doctor Who Star Billie Piper Worried About Nude Scenes / Doctor Who - The Unicorn And The Wasp / Doctor Who - The Doctor's Daughter? /The BBC Announces Some Changes For Doctor Who's 5th Season /
By Ken Hulsey - December 19, 2008

Email ThisBlogThis!Share to TwitterShare to FacebookShare to Pinterest
Labels: BBC, David Tennant, Doctor Who, Sci Fi, Television, The Next Doctor